My latest read, Infinite Days by Rebecca Maizel, has been on my “to-read” list for quite some time.  This past week, I finally got around to reading this one, and I’m so glad I did.  I’ll go ahead and tell you that this is a vampire novel, but I think author Rebecca Maizel has kind of taken the sexy out of being a vampire in this novel (in a good way).  This is not your typical young adult vampire novel.  Being one of the undead is not something to strive for in this book.  It comes with a life of unending pain and torment, and most vampires just want to be human again.  And one of them is going to get that chance… 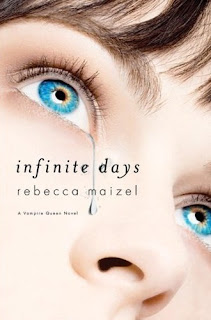 Lenah Beaudonte was once one of the most ruthless vampires in all the world.  She killed without thought or remorse.  In fact, killing was the only thing that brought her any relief from the pain and torment felt by all of her kind.  She wanted to feel something–anything–more than the evil constantly engulfing her.  And the one who made her, Rhode, is about to give her that chance.  Through an ancient ritual rooted in a loving sacrifice, Rhode gave Lenah the gift of humanity.  Yes, he made her human once more at the expense of his own life.

Now, Lenah is human and experiencing a new life as a sixteen-year-old girl.  (As you can imagine, she’s actually quite a bit older than that.)  She must learn what it means to be a teenager in the modern world.  Before his death, Rhode made sure that she would be able to do this.  He enrolled her at a prestigious boarding school and saw that her every need would be met.  So, Lenah is learning, for the first time in centuries, what it means to be a “normal” person.  She’s making friends, attending school, having fun, and even falling in love.

But time, especially when you’ve seen and done so much, has a way of catching up to a person.  You see, Lenah’s coven, a group of super-strong vampires she selected herself, is looking for her.  They’re not quite as willing as Rhode to allow her to be human.  They want their merciless queen back, and they’ll do whatever they must to make that happen, including destroying those that Lenah has come to care for in her human life.  What will she do?  Can she give up those she has grown to love?  Can she relinquish her humanity for the second time in her existence?  Is she willing to follow Rhode’s example and sacrifice herself to save the people she loves?  Find out these answers and more when you read Infinite Days by Rebecca Maizel.

If you know anything about me, you probably already know that I enjoyed this book.  It’s not just the vampire thing that I liked, though that was definitely a plus.  I really enjoyed the glimpses we got into Lenah’s life as a vampire and how that contrasted with her new life as a human.  As a vampire, she was truly evil and horrifying.  Contrasting that with the mind of a teenage girl was, let’s just say, interesting.  I was definitely invested in what happened with Lenah and how she hoped to redeem herself in the end.

There is a sequel to Infinite Days.  It’s called Stolen Nights.  There’s no word yet on when it will be out, but you can be sure that I’ll buy a copy whenever I can.  If you’d like more information, on Infinite Days or author Rebecca Maizel, visit http://www.vampirequeennovels.com/.