Spoiler alert!!! If you haven’t read Beautiful Creatures and Beautiful Darkness, turn back now. Even if you have read these wonderful books, it might not be a bad idea to reread them a bit before starting book three, Beautiful Chaos. This book will make absolutely zero sense if you’re not pretty familiar with the first two books in the Caster Chronicles. Don’t say I didn’t warn you! 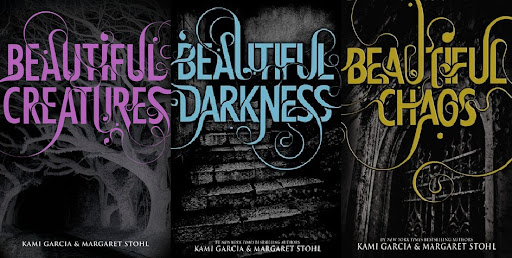 I finished reading the third book in the Caster Chronicles, Beautiful Chaos last night, over a year after I read the second book, Beautiful Darkness. That was not smart. I really should have reread book two before re-entering this world. But it’s too late now, and, to be honest, it didn’t take that long to re-familiarize myself with the fascinating characters created by authors Kami Garcia and Margaret Stohl. (Revisiting my blog posts on the previous two books did help, though.) The characters, plot, and setting in each of these books are unbelievably rich and dramatic, so a little effort expended to remember details was well worth it.

If you’ve read Beautiful Darkness, you may recall that Lena, a powerful Caster (or witch, to you people not in-the-know), claimed herself as both Light and Dark, an unheard-of occurrence in the Caster world. Well, in Beautiful Chaos, we learn that big decisions like the one Lena made can have catastrophic consequences…

Ethan Wate, a Mortal, and his Caster girlfriend, Lena, have survived Lena’s seventeenth moon, and now they must deal with the fallout of Lena’s decision to be both Light and Dark. Lena may be both Light and Dark, but Gatlin, their small South Carolina town, is all dark. The Order of Things has been torn asunder, and Gatlin–and the entire world–is in total chaos. Gatlin is experiencing record-breaking heat, swarms of locust-like insects, lakes drying up, and lots of other stuff that makes people thing that the End of Days is near…and they might be right. Even Lena’s family of Casters is experiencing the chaos. Their powers aren’t working the way they should, and they all know that things will get much worse before they get better–if better is even an option.

Ethan is experiencing his own brand of chaos. He’s forgetting things, he’s being haunted by a strange voice that has followed him out of his dreams and into the real world, and he can no longer trust Amma, the woman who has always been there for him, because she has delved into a darkness that he can’t pull her out of. Is there anyone he can turn to? How can he figure out what’s wrong with him when there are so many wrong things happening?

As Ethan, Lena, and several friends–both known and unexpected–try to find a solution to the madness engulfing the world, secrets are revealed, more questions arise, and Ethan is faced with a horrible choice. What will he have to do to restore order to the world and save everything he knows and loves? Can order even be restored when Ethan and company are seemingly fighting fate itself? What price must be paid to save the world? Find out when you read Beautiful Chaos by Kami Garcia and Margaret Stohl.

Beautiful Chaos is not the end of the Caster Chronicles (and based on the way it ended, I can only say, “Thank the Maker!”). In addition to a novella, Dream Dark, that takes place before the events of Beautiful Chaos, there’s also going to be a fourth book in the Caster Chronicles. I don’t know what the title will be yet, but I do know the book is set for a 2012 release–most likely in the fall. I’ll post any information about the book’s release, title, and cover as soon as I possibly can. No matter what the details are, based on the previous three books, I can guarantee that book four will be amazing. (I’m also hoping that it has a happy-ish ending, especially if it’s the last book in this emotionally-draining-yet-somehow-satisfying series.)

For now, though, you can find a lot of wonderful Caster Chronicles stuff at the authors’ website, http://beautifulcreaturesnovels.com/, and the official fan site, Caster Girls & Boys, http://castergirls.com/. Enjoy!