Even though this post will not be a typical one for me, I will be talking a bit about Clockwork Prince, the second book in Cassandra Clare’s Infernal Devices trilogy (which is the prequel trilogy to her Mortal Instruments series).  If you haven’t read all of the books that precede Clockwork Prince–especially Clockwork Angel–I strongly urge you to do that as soon as possible.  All of these books are unbelievably amazing, and the events of today only increased my love of these series.

Now, for the good stuff…

Today, I had the pleasure of meeting the one and only Cassandra Clare.  As part of her book tour for Clockwork Prince, which was released on Tuesday (and which I finished reading last night), Ms. Clare paid a visit to Greenville, South Carolina.  I live just a few miles away from Greenville, and I was understandably excited about meeting one of my favorite authors.  The event was sponsored by a local independent bookstore, Fiction Addiction, and held in a spot called the Hangar at the Runway Cafe (near the downtown airport, obviously).  And I have to say it was one of the most well organized book signings I’ve ever attended.  (I went to see Stephenie Meyer at a Barnes & Noble in Georgia four years ago, and it was absolute chaos.  Imagine thousands of people crammed into a B&N for upwards of five hours.  Shudder.)

Anyhoo, Cassandra Clare entered the Hangar and answered questions from the audience.  The first few people who asked questions even got a free t-shirt.  I was one of those people…and here’s the back of the shirt: 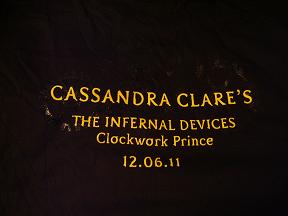 I asked who she would pick to play Magnus Bane if she had any say in the movie casting.  Her answer both surprised and delighted me–Darren Criss, who plays Blaine on Glee.  She said that his ethnicity matched Magnus’, and he seems to have no problems kissing a boy.  For those of you who’ve read the Mortal Instruments series, you know how important this is.

Ms. Clare answered lots more questions on how she overcomes writer’s block, using outlines in her writing, how much influence she has over the upcoming City of Bones movie (very little, sadly), the love triangle between Will, Jem, and Tessa in Clockwork Angel and Clockwork Prince, other books she would recommend, how she would encourage aspiring writers, where her ideas for her books came from, the real-life settings used in the books, the inspiration for the character of Magnus Bane (one of my favorites), and much more.  Throughout the question-and-answer session, Ms. Clare kept the audience laughing and made us fall more in love with her and her wonderful stories.

Then, it was time for the autographing to begin.  I took seven books to be autographed–City of Bones, City of Ashes, City of Glass, City of Fallen Angels, Clockwork Angel, Clockwork Prince, and Steampunk!–and Ms. Clare graciously signed all of them.  Check it out: 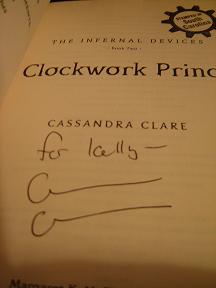 Everyone who attended also received a cool Shadow Hunter poster.

Christmas came early for yours truly this year.  I got to meet one of my favorite authors, tell her how much I loved her books, and I even had the opportunity to recommend a few books to her–Kiersten White’s Paranormalcy series was at the top of my list.  This was an awesome afternoon for Knight Reader.

Now, I’m sure you might be wondering a little about Clockwork Prince, the latest book in the Infernal Devices trilogy.  Well, I’m not going to tell you much about the book because there would be spoiler alerts all over the place if I did.  I will tell you, though, that we learn more about why Will is such a butthead most of the time.  We also delve into Mortmain’s past and what he might be planning for the Shadow Hunters.  For me, however, the driving force in this book was the dramatic love triangle between Will, Jem, and Tessa.  It was infuriating, powerful, and traumatic–for them and for me.  I just hope their situation resolves the way I want it to in Clockwork Princess.

Speaking of Clockwork Princess, it has an expected release date of December 1st, 2012.  (Yes, we have to wait nearly a year for it.  Curses!)  Also, there are two more books in the Mortal Instruments series to look forward to:  City of Lost Souls, due out May 8th, 2012 (and the cover should be released soon), and City of Heavenly Fire, due in September of 2013.  There’s also another Shadow Hunter series in development, the Dark Artifices, which will take place roughly five years after the events in City of Heavenly Fire.  So, there’s lots more Shadow Hunter goodness to look forward to.

If you’d like to learn more about Cassandra Clare and her amazing books, you might want to check out these websites:

I will leave you now, dear readers, for I am spent.  It has been a great day filled with books, authors, and fellow word nerds.  I wish every day could be so awesome.