Spoilers ahead!!!  I finished reading Bloodrose, the third book in the Andrea Cremer’s Nightshade trilogy last night.  If you keep reading this post and haven’t already read Nightshade and Wolfsbane, you will be sorry!  Sorry, I tell you! 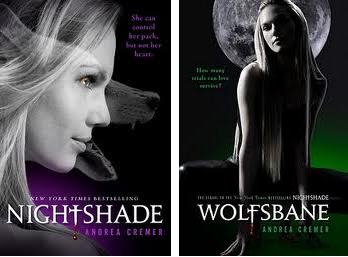 After you’ve read these two books, then you should proceed directly to Bloodrose!

War is looming. Calla Tor and her pack of Guardians (aka werewolves) are uniting with the Searchers to finally defeat the evil Keepers who have oppressed them for as long as anyone can remember.  The primary weapon in this war is Shay, the Scion (and, quite possibly, the love of Calla’s life), who can only defeat the bad guys if he obtains every piece of the Elemental Cross (two kick-butt swords made out of four pieces empowered by earth, air, water, and fire).  Finding the pieces of the Elemental Cross is treacherous, but it is a journey that must be made if this war is to be won.

As if waging war isn’t tough enough, Calla also has to tread the dangerous waters of her own love life.  After saving Ren, the guy who was supposed to be her alpha mate, Calla is worried about Shay’s reaction and what it could mean for the battles ahead.  Calla must deal with her feelings for both guys.  She thought everything was so cut and dried, but what if it’s not?  What if she really is meant to be with Ren?  What if Shay’s role as the Scion places him forever out of her reach?

Even though Calla is torn between the boy she’s always known and the one she gave up everything for, she has to put her own desires aside to face the difficult journey ahead.  She must step up as the alpha of the pack (since she can’t choose her mate at the moment) and lead her fellow wolves and their Searcher allies into battle.  They will face horrors that make them want to give up, they will encounter former friends who have become their enemies, and they will lose people they’ve come to care about.

These warriors will dive headlong into certain death in order to break the hold the Keepers have on them and everything they hold dear.  Will they be successful?  Do they have any hope of winning this war when it’s not clear who is friend and who is enemy?  And if they do drive the Keepers away, what does it mean for Calla and her pack?  Will Calla finally choose her mate, or will that choice be taken out of her hands?  Do the wolves even have a place in a world without Keepers?  Read Bloodrose, the final installment in Andrea Cremer’s Nightshade trilogy, to discover the sacrifices that must be made in war and in love.

Like so many before it, I don’t think this post has done justice to the breathtaking story that is Bloodrose.  It was a fantastic book, and I was on the edge of my seat the whole time I was reading.  (I almost called in sick to work yesterday so that I could finish the book.  I didn’t, but I did rush home after school and immediately began reading.)  There was a surprising amount of humor in this book when you consider that it’s a tragic love story set in the midst of a supernatural war.  I was also gripped by the love triangle in Bloodrose (and the other two books in this series).  I felt torn right along with Calla, and, for a large portion of this book, I wasn’t sure if I wanted her to end up with Shay or Ren.  (She had some steamy scenes with both of them.  So steamy that I would recommend this book for ages 16 and up.)  In the end, though, I was very satisfied with how the Nightshade trilogy concluded.  I mourned the loss of a couple of characters while I celebrated the demise of others.  I felt like everything happened as it should, and, at least for a while, the world of the Guardians and Searchers is at peace.  A great end to a great series.

But wait…there’s more!  There’s currently a Nightshade novella, Treachery, available through Barnes & Noble and Amazon, which tells Ansel’s story.  (You might recall that he is Calla’s little brother.)  There will also be a prequel to the Nightshade trilogy, Rift, which should be out on August 7th of this year.  For more information about these extras and the entire Nightshade series, visit http://www.nightshadebook.com/.  Enjoy!