Ungifted by Gordon Korman is about a young troublemaker who mistakenly gets transferred to the school for the gifted in his district. I’m coming to this book with the experience of someone who was in the gifted program at school. (Unlike the situation in this book, we didn’t have a separate school…just separate classes.) In many ways, it was a lot easier to identify with the “nerds” in this book that it was with the “normals.” Throughout middle and high school, I was never interested in attending school dances, I found most of my classmates to be vapid troglodytes, and I wasn’t all that concerned with being popular. I thought it was a lot more fun to get good grades, be in the band, and make my parents happy. (Yes, I know this makes me a weirdo.  I’m cool with that.) To this day, I have trouble understanding “normal” people (and I think they could say the same about understanding me).

Having said all that, I think Ungifted is an excellent read for anyone–nerd or normal–who has ever felt out of place. Even the main character, Donovan, has moments where he doesn’t fit in. When you boil this book down to its most basic idea, it’s all about being comfortable in your own skin and finding balance in your life. Even though this book is geared mainly toward middle grade readers, I think its message is one that we could all stand to learn. 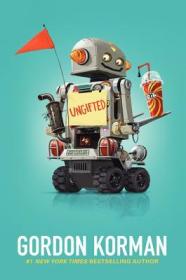 Donovan Curtis’ middle name should be “Trouble.” He can’t seem to stop himself whenever the opportunity for mischief arises. Usually, he can get out of the messes he makes…but this time is a little different. All he did was hit a statue with a stick. How was he to know that the statue actually had two parts…and one of them was loose? Could he have possibly predicted that a large metal globe would careen down the hill at school and crash into the Hardcastle Middle School gymnasium during a big basketball game? Probably not…but all of it is his fault, and he knows that a severe punishment is coming.

…or is it? Donovan knows that it’s just a matter of time before the superintendent calls him to the office for the punishment of a lifetime. Finally, the call comes…but it’s not exactly for what Donovan was expecting. It seems that there was a little mix-up, and Donovan is being transferred to the Academy of Scholastic Distinction (ASD). No detention.  No community service. No paying for the damaged gym. No, thanks to a paperwork snafu, Donovan is being moved to a school for gifted students. Nevermind that he’s not what any teacher (or parent, sibling, friend) would call “gifted.” While everyone is a little perplexed by this news, Donovan sees it as his chance to escape from the trouble he’s caused at Hardcastle Middle. After all, if he’s not there, it’ll be a lot harder for the superintendent to find him!

On Donovan’s first day at ASD, it becomes pretty clear that he doesn’t belong there. He doesn’t excel in any subject, and he spends more time in the bathroom than anywhere else. Both his teachers and his fellow students question why Donovan was placed at ASD. Soon, though, Donovan makes a place for himself at this prestigious school (that has much cooler, expensive, and newer stuff than the “normal” school down the road). Maybe what the high-IQ crowd needs most is a little dose of normal!

Donovan brings new life to his ASD homeroom. He convinces the class to give their robot a name. He shows them that playing lots of video games might give someone some mad skills in operating said robot. He gets his very pregnant sister to provide the class with a much needed human growth and development credit. He introduces one genius to YouTube (which may or may not have been a mistake). It’s also thanks to Donovan that his new friends get to experience their first school dance. (It doesn’t end well.) Even though Donovan knows he’s not really one of them, he feels more at home with his genius friends than he ever did with his trouble-making buddies at Hardcastle.

Even as he’s starting to fit in at ASD, Donovan’s past is closing in on him, and it’s just a matter of time before it’s revealed that he’s responsible for destroying the Hardcastle gym. What will happen to Donovan? And how will it effect his placement at ASD and the friendships he’s created there? Is Donovan really as “ungifted” as everyone seems to think, or do his gifts lie outside the realm of academics? Read Ungifted by Gordon Korman to learn how one kid can bridge the gap between “nerd” and “normal.”

As I said before, this book is a great read for anyone who’s ever struggled to fit in. The story is told from multiple perspectives–kid and adult, student and teacher, nerd and normal–so every reader should find something to relate to in Ungifted. I think this book highlights that everyone has gifts. Some are just more obvious than others.

Adults–specifically educators–will be struck by the educational inequalities in this book. It’s very plain that the smart kids get the newest, best stuff, while everyone else has to make do with old, worn-out buildings, substandard cafeteria food, and inadequate resources. (I’m sure most educators can think of a school or two that gets all the best stuff while the rest of us try to figure out ways to work with what we have.)

Ungifted would be a welcome addition to any upper elementary, middle, or even high school library. It’s a must-read!