Time for the nerd-shaming to begin. Yes, I waited until I was 34 years old to read Ender’s Game. I don’t know what took me so long, but the movie adaptation pushed this book to the top of my reading list. I finished the book yesterday evening, and I hope to see the movie over my upcoming Thanksgiving break. (I would see it this weekend, but Catching Fire and the Doctor Who 50th anniversary are kind of taking precedence!) 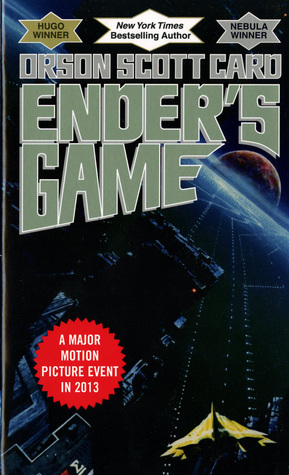 I don’t know that I can say anything about Ender’s Game that hasn’t already been said. It was nerve-wracking, anxiety-inducing, horrifying, and, loathe as I am to admit it, highly entertaining. It’s hard for me to imagine a child going through so much and still retaining even a smidgen of humanity…but Ender managed it somehow. This child, who essentially became a soldier at the age of six, endured torture from other children and the adults around him. Did the adults–leaders in the world’s military–have reason to put Ender through horrors that would break grown men? Sure. But do those reasons, however noble, excuse the torture of a young boy? I’m not so sure about that. Do the ends justify the means? That’s a question that has puzzled people for centuries.

I deal with 5-11 year olds all the time, and I can’t imagine any of them being strong enough to deal with what Ender faced. They would be crying for their mommies within seconds. (So would I, come to think of it.) And I definitely wouldn’t want to imagine any of my elementary school kids as military leaders. (How scary is that?! The fate of the world in the hands of a 3rd grader!)

This is not a children’s book, despite the main character being a child. Ender’s Game is, simply put, science fiction at its best. Everyone who considers herself/himself a fan of science fiction should read this book (if they haven’t already). Hopefully, my fellow nerds haven’t waited as long as I have to become engrossed in this amazing story! I look forward to seeing the movie, and I hope it lives up to its awe-inspiring source material.