Warning! You MUST read Tera Lynn Childs’ Oh. My. Gods. and Goddess Boot Camp before reading Goddess in Time! And if it’s been over three years since you read the last book, a refresher may be in order. (Seriously, I spent the first couple of chapters really confused, and I had to look to previous blog posts, Goodreads, and the author’s website to re-familiarize myself with the main characters.)

If you’re still reading, I’ll assume you’re caught up with the Oh. My. Gods. series. Goddess in Time, a 14-chapter novella, kind of continues things with Nicole’s story. (If you don’t remember, Nicole is one of Phoebe’s best friends, and may be best known for getting into trouble and her sarcastic manner.) 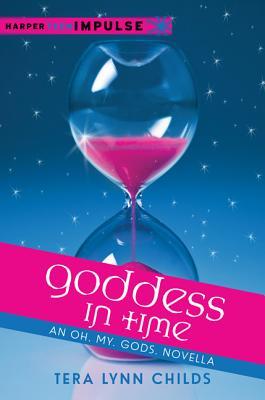 When Nicole was a child, she and her friend Griffin (now Phoebe’s boyfriend) did something that altered their lives forever. One tiny prank on Mount Olympus, and everything changed.  As punishment, Nicole’s parents were stripped of their powers and banished, and Griffin’s parents were smoted. Seems harsh, right? Well, not when you’re dealing with the Greek gods, especially when one of those is Hera.  If only there were some way for Nicole to make things right…

Well, Nicole may have stumbled across something that could work. It’s something that no one has tried for centuries. Chronoportation. In other words, time travel.  It’s dangerous and highly illegal, but this power could be just what she needs to undo her mistakes.  She’ll need to travel to the palaces of Zeus, Poseidon, and Hades, and contact her godly ancestor to make this happen, but Nicole is determined to right her wrongs and bring her parents back where they belong.

But things may not be quite as simple as Nicole had hoped. (They never are when in comes to Greek deities!) Nicole will come face-to-face with her own past on this journey, and she may not be totally prepared for what she finds. What will Nicole learn about her heritage and, more importantly, about herself in this quest for justice? Discover Nicole’s secrets when you read Goddess in Time, an Oh. My. Gods. novella by Tera Lynn Childs!

Even though it took me a little while to step back into this world, I did enjoy Goddess in Time. (It could be because I’m a little time-travel crazy right now. The Doctor Who 50th anniversary special is just two days away!) Nicole learned a lot about herself in this story, and she’s just an all-around fun character to read about anyway. (I do enjoy my fair share of snark and sarcasm.)

If you want even more stories from the Oh. My. Gods. series, check out Tera Lynn Childs’ website at http://teralynnchilds.com/. There are three more really short, sweet stories right there on the site:  Phoebe’s Fair Valentine, The Twelve Days of Stella, and Nicole’s Labyrinth.  I read them all last night, and, from what I could determine, all of them take place after Goddess Boot Camp but before Goddess in Time. Enjoy!