Warning: Read Capture the Flag by Kate Messner before proceeding. That is all.

Eleven months ago, I finished reading Capture the Flag, the first book in a new series for upper elementary and middle grade readers by Kate Messner. This week, I finally got around to reading the second book in the series, Hide and Seek. This series revolves around several young people who–along with their parents–are tasked with protecting the world’s art and artifacts. They’re known as the Silver Jaguar Society. In Capture the Flag, as the title suggests, the kids–Anna, Henry, and Jose–end up saving the original Star Spangled Banner. In Hide and Seek, though, their adventures take them far away from home and into the rain forests of Costa Rica… 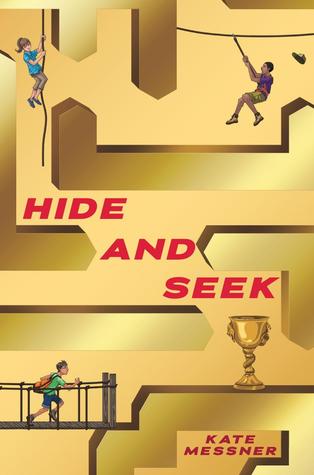 Just when Anna, Henry, and Jose think that things will get just a little back to normal, their world is rocked once again. A priceless Central American artifact–and treasure of the Silver Jaguar Society–has been stolen. The Jaguar Cup was replaced with a fake, and the members of the Society are in a scramble to find out who took the original.

This mad scramble takes the Society–and its most junior members–to Costa Rica. While their parents take off on what appears to be a hot lead, Anna, Henry, and Jose remain behind at a rain forest lodge to await news. But it seems that the real mystery is at the lodge, and, once again, it will be up to a bunch of kids to save an artifact that means so much to so many.

The quest for truth will lead this merry band through a rain forest teeming with danger. But the danger won’t just come from the elements. No, the real danger will come from those who seek to claim the Jaguar Cup for their own.

How can a group of kids battle against crazed adults bent on claiming treasures at any cost? What fears will they have to face in order to come out on top? And will they finally vanquish the enemies of the Silver Jaguar Society? Join Anna, Henry, Jose, and friends in their quest for the truth when you read Hide and Seek by Kate Messner!

Hide and Seek was a fun, fast read that, like Capture the Flag, I will recommend to my students who enjoy stories like Indiana Jones and National Treasure. It’s a great adventure story that is sure to keep readers, young and old, engrossed until the last page.

I know some of my students will read this book and want to visit the rain forests of Central America. For me, the book had the opposite effect. Actually, all I had to do was read about one snake, and I was done. When you add in a bunch of ants, rickety bridges, and zip lines,it’s game over for me. No one has ever called me an adventurous sort.

According to Kate Messner’s website and a sneak preview at the end of Hide and Seek, we can look forward to at least one more book in this series. Manhunt is slated for a spring 2014 release, and it continues to follow the Silver Jaguar Society in its search for its most notorious enemy, Vincent Goosen. I look forward to it.