Danger, danger! Turn back now if you haven’t read the first fourteen (yes, fourteen!) books in Rachel Caine’s Morganville Vampires series. They’ve all led up to the fifteenth and final book in the series, Daylighters, and you absolutely must read every single book before you dive into the finale.  If you’re wondering what the first fourteen books are, here you go:

If you’re not already immersed in this fantastic series, now’s a great time to get into it. You don’t have to wait for anymore books! For now, though, I’m going to reflect a bit on the final book in the series, so be off with you if you’re not caught up!

It’s been a wild ride. A few years ago, my friend Jennifer introduced me to the Morganville Vampires series, and, after reading the first book, I was hooked. (I didn’t know at the time that I would be in for a fifteen book commitment, but that’s okay. I love reading books in a series, and, honestly, it wouldn’t upset me now if there were more books to come. There aren’t, by the way.)

During this journey through Morganville, I’ve lamented that the main characters never have anything good happen to them for long. That doesn’t really change in Daylighters (nor would I expect it to). In this final installment, Claire and company are fighting what may be their most dangerous foe yet. 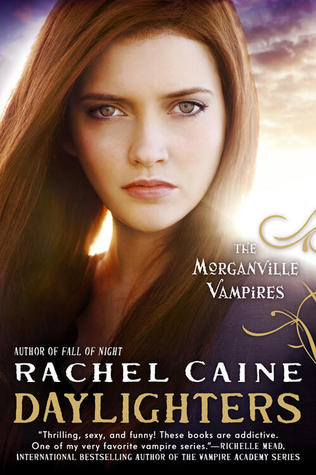 The Daylight Foundation and their charismatic leader Fallon are ridding Morganville of vampires. Sounds like it would be a good thing, right? Well, things aren’t as rosy as Fallon would have everyone believe…and Claire knows it. She and her friends see firsthand just what Fallon is doing to keep the vampires corralled, and they know things are bound to get much worse. (They’re right, as usual.) “Worse” comes in the form of Michael and Eve being split up, Shane becoming some sort of weird hellhound, Claire being arrested, and their beloved Glass House being threatened with demolition. Sunshine and roses, yes?

Things may actually be sunshine and roses for many of the humans in Morganville, but there is a definite undercurrent of menace in this new order. And when Claire’s vampire allies–Myrnin, Amelie, and Oliver–find sufficient strength and will to fight back against this new threat, all bets are off.

War is coming to Morganville, and, loathe as she is to admit it–even to herself–Claire wonders which side she should really be on. Should she side with the Daylighters, who are bringing a peaceful existence to many of the humans who lived in fear for so long, or should she stay with the vampires who founded this town?

There really is no choice for Claire and her friends. Even though many of the vampires are truly terrifying, many more have shown loyalty to the humans in their charge. How could Claire possibly abandon Michael, Myrnin, Amelie, and even Oliver (who is grumpy on a good day)?

Claire, Shane, Eve, Michael, and company will use every tool and ally at their disposal to bring the Daylighters down…but will it be enough? Can vampires and humans work together to bring down a fanatical zealot and convince his followers that a peaceful coexistence is possible?

No matter what the outcome, one thing is certain. A new day is dawning in Morganville. Will it be a day full of light and possibilities or a day soaked in the blood of war? I’ll leave that for you to discover…

This finale, like the other books in the series, was quite the roller-coaster ride. There were times when I wondered how on earth my favorite characters could possibly get out of their predicaments. I was anxious throughout the bulk of the book, and I longed for a happy-ish ending, especially since I hadn’t got one in fourteen other books! I’m thrilled to say that, to a certain extent, I got what I wanted. The ending was rather satisfying, and I closed the book with a contented sigh.

After fifteen books, I am sad to say goodbye to Morganville and the characters I’ve come to know and love. I’ll especially miss Myrnin, the mad scientist vampire. Every time I put on my killer bunny slippers (with sharp, pointy teeth!), I think of him. Yes, Claire, Shane, Michael, and Eve drove the stories along, but, for me, Myrnin was one of the main reasons I kept coming back for more.  (That probably says more about me that I’m comfortable revealing.)

If you’d like to learn more about The Morganville Vampires or author Rachel Caine, take the time to visit one of these sites. If you go to the young adult page on the author’s website and click on YA short fiction, you’ll find a selection of short stories that explore Morganville and its residents just a bit more. (These may also be on the official Morganville Vampires site.)

Goodbye, Morganville. It’s been an adventure.