No, this is not my standard anti-Valentine’s Day message. For the month of February, my book club decided to read books with “love” in the title. I didn’t want to trot out a book I’d already read, so I dove into my sizable to-read pile and pulled this anthology out.

Don’t let the title fool you or turn you away. Love Is Hell features five short stories from some pretty wonderful authors: Laurie Faria Stolarz, Scott Westerfeld, Justine Larbalestier, Gabrielle Zevin, and Melissa Marr. I kind of expected some light-hearted love stories with paranormal twists, but I got so much more than that.  Each of the stories explored the darker sides of love, and they were so well-told that I found myself wanting more. (Scott Westerfeld’s story, in particular, would be great fleshed out into a full-length novel…or series.) 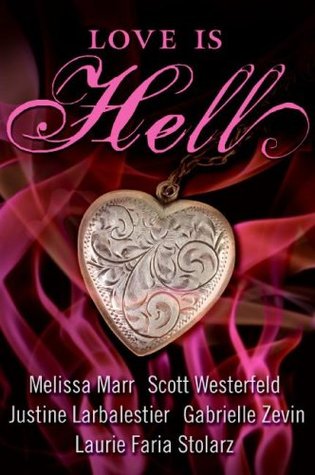 The first story in this anthology is Sleeping with the Spirit by Laurie Faria Stolarz, and, as the title suggests, this is something of a ghost story. Brenda, the main character, is experiencing some fairly intense nightmares that leave her with mysterious bruises.

Brenda later learns that her house is haunted, and her bruises are being caused by a ghost, Travis, who is trying to hold onto her. Brenda, then, must determine just what this ghost wants and how it will impact her own life and past. As you would expect in a supernatural love story, romance is brewing between Brenda and the ghostly Travis…which creates some interesting situations for Brenda, especially when she finally helps Travis with his “unfinished business.”

Scott Westerfeld’s Stupid Perfect World is probably my favorite story in this book. I think it can best be desribed as a futuristic tale. (When I described it to my friends, they said it sounded sort of dystopian, but I don’t think I totally agree with that.) In this story, teleportation is a common mode of transportation, research is done in something called “headspace,” sleep is unheard of, and most diseases have been wiped from the earth. Young people learn about what life was like in the past in a class called “Scarcity.”

A big project is coming up in this class, and each person will have to pick just one thing from the past to experience for two weeks. Some choose to experience diseases (which is no big deal, really, since they can have procedures to correct everything when the project is over), some choose to do without teleportation, but two students are doing something a bit different.  Maria decides to do without the standard hormone regulators. She wants to experience teen angst and all that it entails.  Kieran doesn’t know what his project will be at first, but, with a little help from William Shakespeare, he decides to allow himself to sleep. He’ll have to learn about the cycles of sleep, how the body prepares for sleep, and all that other wonderful stuff…but it’s not as easy as he thought it would be. At least not until Maria helps him a bit.

Maria’s hormones start messing with her pretty quickly. She starts feeling “twirly” and noticing Kieran in a very special way. Poetry seems to explode from her brain, and it’s this poetry that brings Maria and Kieran together. Maria reads Kieran to sleep every night, and, before long, Kieran starts to dream about Maria, a girl he never would have noticed before this project.

All is not moonlight and roses for these two, however. Maria is becoming rather emotional, and those raging hormones don’t exactly make her rational all the time. This leads to some problems with Kieran. I’ll let you discover if these two make it and what will happen to them when this project ends.

The third story, Thinner Than Water by Justine Larbalestier, was rather disturbing. It revolves around a girl, Jeannie, who lives in a very primitive culture…a culture that puts on a show for tourists who come to town. Jeannie lives in a family of bakers, and that’s basically all they focus on. They expect Jeannie, who is only sixteen, to marry soon and begin having children.

Jeannie wants to run away from her family, but something–or someone–stops her. Robbie, the town outcast, expresses interest in Jeannie and promises that he’ll “handfast” with her during the coming Lammas Day celebration. (Essentially, they’ll get engaged and live with each other for a year before they decide to commit to marriage.) Jeannie agrees and sees this as a way out of her family (made up of truly horrible people).

Well, that’s what happens…but Jeannie’s family isn’t exactly eager to let her go to Robbie, a boy they believe to be one of the “fair folk.” They think he is evil and is spreading his curse to Jeannie.  Jeannie doesn’t really believe in all that stuff, but she knows her family is serious about this…especially when they take Robbie from her in the most brutal way possible. And when Robbie inexplicably returns just when Jeannie is rebuilding her life, what will happen? Will Jeannie take Robbie as he is now, or will she try to build a life for herself?

Gabrielle Zevin’s story, Fan Fictions, is probably every fangirl’s deepest nightmare. I know we all joke about having “book boyfriends,” but this story takes things a bit further. It’s a rather uncomfortable read, and I honestly don’t know what to do with how the story unfolds.

Paige is the epitome of an average girl. She often goes unnoticed, she sits in the middle of the classroom, and she waits for someone to really see her. One day, it actually happens. After spending some time in the school library (and getting a book recommendation from the new librarian), Paige feels someone looking at her. She turns and sees a gorgeous guy, Aaron, who doesn’t seem to fit into her neat little world.

Aaron is everything that Paige could want in a guy. He’s mysterious, he dotes on her, and, most importantly, he notices her in a way that no one else ever has. But there are some things that don’t add up. Aaron never talks about his family, he doesn’t eat, he’s always absent from school. Paige really knows very little about him or his past. None of her friends have met or even seen him. Paige wants things to change, but Aaron is resistant, and Paige soon learns why. Aaron is not totally human (of course).

Soon enough, things begin to unravel for Paige and Aaron. And when Paige learns that everything she believed about this “relationship” is contrived, she will come totally unhinged (if she wasn’t before). The lines between fantasy and reality will become blurred, and Paige will be unable to deal with the fallout. (It’s easy enough to relate to this. I felt sort of similar Sunday night when I thought my beloved Sherlock had a girlfriend. Sigh.)

The final story in this anthology, Love Struck by Melissa Marr, involves selchies (or selkies, if you prefer). These creatures live as seals in the sea and shed their skin to live on land as humans. In this story, Alana (a human) is seemingly entrapped by a selchie, Murrin, who wants to make her his beloved.

Alana wants none of it, and she definitely expresses this to Murrin. Murrin, though, is sure he’s found the love of his life, and he does everything in his power to convince Alana to stay with him. But Murrin does not figure on his brother, Veikko, using Alana–and her growing feelings for Murrin–to settle an old score.

Love and lies collide in this tale filled with longing, deception, and overcoming obstacles. What will Alana and Murrin ultimately do to remain true to all that they hold dear?

It should be obvious that I thoroughly enjoyed this anthology. (I really didn’t expect to.) I was prepared for fluff, but I’m pleased to say that I got some real meat here. I fully intend to explore the other Short Stories from Hell anthologies, and I can only hope that those stories live up to those I found in this installment.