A word to the wise: If you haven’t read the first three books in Carrie Jones’ Need series (Need, Captivate, and Entice), it might be a good idea to do that now.  And if it’s been about three years since you’ve read these books, a refresher might be in order before proceeding with the fourth and final book in the series, Endure. (Should have taken my own advice on that one.)

So, I’m spending part of my reading this year catching up on various series. It’s hard to keep up when most of what one reads is part of a series.  Three years ago, during a week-long snowstorm here in South Carolina, I read the first three books in the Need series by Carrie Jones.  Fast forward a little over three years, and I finally started reading the fourth book, Endure, during yet another freak snowstorm in South Carolina.  (When I say “freak” here, I’m talking like 6 inches of snow…which basically shut down the entire state.  It was a big deal, and I didn’t leave my house–or my pajamas–for days.) It seemed to fit as this series takes place in Maine, and pixies have brought on some sort of super-winter as a prelude to Ragnarok. (Don’t know what Ragnarok is? Look it up. That’s my sassy librarian answer for you.)

Anyway, I say I started this fourth book during Snowpocalypse 2014, but I didn’t finish it until a bit later.  It was difficult to get invested in the series again after spending so much time away from it.  To put things in perspective, it took me about three weeks to get through the first 30 pages of Endure…but I read the last 230 pages in the span of a single evening. Once I refamiliarized myself with the characters and story, I was enthralled, but it did take some time…and a mention of my favorite Norse god, Loki (who I will always and forever picture as the glorious Tom Hiddleston). 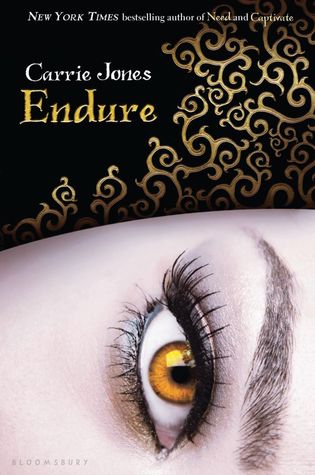 Zara White is not exactly a normal girl. Not anymore, anyway. After turning pixie to save Nick–her boyfriend and a werewolf–from Valhalla, Zara has hopes that things can return to some kind of normal.  But normal’s not really possible when you are tied to a pixie king, being hunted by another one, your grandma–a weretiger–is missing, people all over your town are being abducted, and you’re at the center of it all.

As if Zara didn’t have enough to deal with, Nick wants nothing more to do with her now that she’s a pixie–a pixie queen, as a matter of fact–and Zara’s growing feelings for Astley, the good pixie king, are more confusing than ever. It’s quite the conundrum, but Zara will have to put her love-life on the back burner for now…especially if she is to have any hope of halting the apocalypse. No pressure.

Zara is facing some tough choices. How can she train her human friends to fight evil pixies? Can she retain her humanness while taking her place as Astley’s queen?  What does that even mean, and what will Zara do when some things are completely taken out of her hands?  Will she still be a strong leader? Will she still save the world from certain destruction? How? What sacrifices will Zara have to make to protect those she loves the most…and will those sacrifices be enough? There’s only one way to find out. Jump headfirst into trouble…

Now that I’ve finished the entire series, I must say that the first book was probably my favorite, and this last one came in a distant second. (It would have been a close second, but it just took me way to long to get re-invested. The perils of loving to read serial fiction.) The entire series turns pixie lore on its ear, and it pays homage to Norse mythology. That’s something I appreciate.

On top of all that stuff, the Need series features some very strong female characters. Yes, Zara is the protagonist and is seen as the strongest of the series’ female characters–which I think she is–but there are many other strong women and girls given time in this series, and each one has her own brand of strength. From Zara to her grandma to Issie to Cassidy and several more, the females in this book do not depend on men to do their fighting for them. These ladies go out and make things happen, and they are fully capable of stopping the end of the world on their own, thank you very much. (The guys do help some, but the action definitely centers on the girls in the group, in my opinion.)

All in all, the Need series is a great read if you’re into supernatural stuff with a bit of good, old-fashioned mythology thrown in. You may need to look up a few things if you’re unfamiliar with Norse mythology, but that’s part of the fun! (Granted, my idea of “fun” may need a bit of work.)

For more information on the Need series and author Carrie Jones, check out her website at http://www.carriejonesbooks.com/. You can find links to all of Carrie’s social media pages there.