I’m not quite sure how I feel about my latest read, Skinny by Ibi Kaslik. I’m not even sure I would have considered reading this book if it had not been on sale…or if my book club wasn’t reading green books this month (books with green covers, “green” in the title, or by authors with the last name Green…you know, in honor of St. Patrick’s Day). With a green popsicle on the cover, I kind of expected Skinny to be sort of lighthearted. Boy, was I ever wrong. 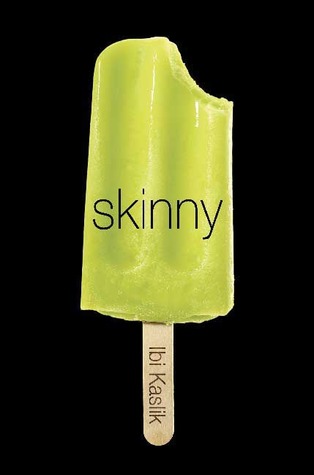 Skinny is told from the perspectives of two sisters.  Giselle, a former medical student, is struggling with anorexia and quite a few other problems. Holly, an eighth grade athlete, is watching her sister, who used to be so strong, totally self-destruct.  Both girls are dealing with very different memories of their deceased father, relationships with guys, and the general business of living. Holly seems to want to help Giselle, but how do you help someone who is so bent on ruining her own life?

The character of Giselle is at once sympathetic and repellent. The reader wants her to turn her life around because she has so much potential, but it’s not easy to even read about someone who doesn’t want to help herself.  One minute it looks like she’s making a turn for the better; the next, she’s returning to her same old patterns. And soon, those patterns will manifest in Giselle’s entire body breaking down.

Holly, the younger sister, has her own issues. She’s partially deaf, she’s prone to acts of spontaneous stupidity, and she crushes on her sister’s boyfriend. But when you see what she has to deal with at home, Holly’s actions at least make a little bit of sense. She’s worried about her sister, but she’s also still a girl focused on her own life…which is going through a rough patch at the moment.

As the story progresses, and we get to know Giselle and Holly a little more, the reader roots for things to change. It doesn’t quite happen, though. This story is not a delightful romp through the park.  There is no happy ending or magical cure for the many issues plaguing Giselle or those who have to watch her downward spiral. As a matter of fact, I found much of the book to be depressing, and only occasionally did I even crack a smile while reading. But that’s okay. This book deals with some pretty serious issues, so it follows that the general tone of the book is serious as well.

Did I get what I expected when I started reading Skinny? Absolutely not. Did I like the book as a whole? Some of it. It was an interesting story, but it was a little hard to follow at times.  I don’t know if that’s because it was hard to nail down an exact setting through much of the book or because Giselle’s thought processes were so scattered.  (I honestly don’t know if the problem was with the character of Giselle or with the author’s writing.) Several times while reading, I asked myself, “What is the purpose of that word or sentence?” Some things just didn’t make sense to me. Maybe I’m alone in that, but I had to reread some passages a couple of times, and things still didn’t become clear.

I do appreciate that this book didn’t have a happy ending. That may seem weird, but, when you’re dealing with issues as serious as eating disorders and everything that results, sometimes happy endings just aren’t realistic. Anorexia takes a toll on the body, and we definitely see that in Skinny. Giselle wasn’t the only one to suffer because of her illness, though. Those around her did as well, and I imagine that many readers with similar experiences will relate to the pain depicted in this book.

Despite the age of Holly’s character, Skinny, in my opinion, is not a book that belongs in the hands of middle grade readers. (Some may be able to handle it but not many.) Much of the content (drugs, sex, drinking, etc.) is for mature audiences, so I would recommend this for high school students who have some modicum of maturity.