Books about survival have never really been my thing (which is odd considering that the only reality TV I watch is Survivor).  I can remember reading Hatchet in middle school and hating every minute of it. I’ve read a several I’ve enjoyed, but, more often than not, those books were science fiction. One notable exception was Beauty Queens by Libba Bray. I loved everything about that book.

Anyway, my latest read, The Raft by S.A. Bodeen, may force me to reevaluate my feelings on survival books, particularly when they are fairly realistic. This book was gripping from start to finish, there were twists that I honestly didn’t expect, and I was on the edge of my seat wondering what would ultimately happen to the main character. I also found this book to be especially timely. When one watches the news and sees the continued search for answers about Malaysia Airlines Flight 370, it’s difficult not to wonder if there could still be survivors, and, if there are, how have they found the strength to fight the elements and the odds stacked against them.  That’s the story we get in The Raft. 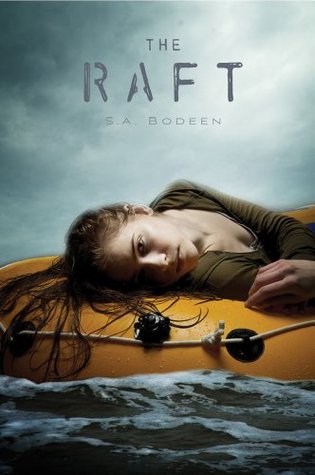 Robie Mitchell is no stranger to travel. Her parents are researchers on the island of Midway in the Pacific Ocean, and, when Robie needs a break from Midway, she takes off to stay with her aunt in Honolulu. That’s where we first meet Robie. She enjoys a certain freedom with her aunt that doesn’t exist wit her parents…but maybe she has a little too much freedom. When Robie’s aunt goes out of town for a bit and leaves Robie on her own, the girl discovers that maybe she’s not quite ready for so much freedom, responsibility, and just being alone. So Robie decides it’s time to head back to Midway and the comforting arms of her parents.

It should have been a simple, short flight. She’s taken it dozens of times before with no problems, but this time things are different. The plane encounters some rough turbulence, and, before she knows it, the aircraft loses its engines. The copilot, Max, tosses Robie, an emergency raft, and a few basic supplies out of the crashing plane and into the churning water below. Max follows her and pulls Robie onto the raft, and the real fight for survival begins.

In the days that follow, Robie encounters thirst, hunger, her worst fears, and hopelessness. One minute, Robie prays for rain so that she can quench her thirst. The next minute, she’s hoping the rain will stop so that she can get dry enough to avoid hypothermia. The only food available is Max’s precious bag of Skittles. Vicious tiger sharks are real threats in the water, and Robie’s only real protection is a flimsy rubber raft.

Through everything, Robie relies on her own strength, intelligence, and conversations with Max to get her through this horrible ordeal, but will it be enough to survive? Is anyone even looking for her? And when Robie confronts the truth of her situation–that she may not make it out of this alive–how will she cope?  How would you?

You might be wondering why I picked this book up in the first place if it’s not a typical read. Well, it’s a nominee for the 14-15 South Carolina Junior Book Award. I like to read as many of these titles as I can to see which may be appropriate for my 4th and 5th grade students. (For the record, some of them may be able to handle this book. I’m still debating whether or not to put it in my school library. At the very least, though, I will recommend it to certain students who I know will like it.) This leads me to lots of books–many of them gems–that I might not otherwise read. The Raft is one of those gems.

The Raft highlights what one girl is capable of when her back is against the wall. Robie is a very strong female character that I think any reader will be able to respect. Yes, she rages about her situation, and she wants an easy way out of it. Who wouldn’t? But, ultimately, she finds the strength within herself to do what she must to survive. She even references Katniss Everdeen and The Hunger Games in her struggles. (Robie points out that Katniss had it easy compared to herself.) Robie is definitely a character to be admired.

If you’re thinking that Robie’s story sounds familiar, you’re probably not alone. It reminded me of the movie Castaway. Instead of Tom Hanks, though, we have a teen girl. The characters’ experiences are very similar.

I highly recommend The Raft to readers who are looking for a gripping–and very realistic–survival story. It may lead to some conversations about how readers would react if found in similar situations. As for me, I doubt I’d make it out alive. Maybe you’d fare better!

For more information about The Raft and other books by S.A. Bodeen, visit http://www.writersabodeen.com/. You can also follow the author on Twitter.