I am woefully behind on reading the 2014-15 South Carolina Children’s Book Award nominees, so, for the next several weeks, I’m going to do my best to read as many of these as possible. I’ll mix it up a little with some ARCs and YA books, but I have to get the SCCBA nominees read before school starts back, so get ready for some children’s literature!

This morning, I finished reading Sugar by Jewell Parker Rhodes. This SCCBA nominee centers on Sugar, a ten-year-old girl who works on a sugarcane plantation during Reconstruction. This book is a hugely welcome addition to library and classroom collections where, quite frankly, fiction (and nonfiction) books about this time period are sorely lacking. 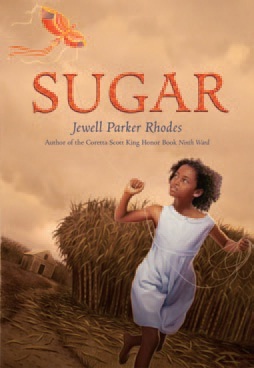 The year is 1870, and Sugar has been free for several years, but her life is still a hard one. Her father was sold before the end of slavery, and, though he promised to make his way back to Sugar and her mother, he hasn’t returned to the River Road Plantation. Two years ago, Sugar’s mother became ill and passed away, so Sugar is an orphan, looked after by the community of workers on the sugarcane plantation. Sugar–who hates her name and what it represents–lives alone in a windowless shack and is expected to work from sunup to sundown, and even through the night during harvest season. It doesn’t matter that she’s a child.

Sugar tries not to let her troubles get the best of her, though. She finds fun wherever she can…and that fun sometimes gets her into trouble! She climbs trees looking for eagles’ nests, enjoys the stories told by Mister Beale, and plays with Billy, the plantation owner’s son, even though everyone tells her she shouldn’t. Sugar doesn’t see what the harm is. They’re the only kids around, and they like each other. Does it really matter that they have different color skin? It seems the end of the war changed a lot of things, but they didn’t change that much.

Now that so many freed slaves have moved north, Mister Wills, the plantation owner, needs more workers, and these new workers, men from China, are going to change everything on the plantation once again. Sugar is warned to stay away from the newcomers, but she wants to know more about them. She’s curious about their food, language, dress, how and why they journeyed to America, and, most importantly, the interesting stories they have to tell.

Sugar knows that she can learn much from her new Chinese friends, but can she convince everyone else? Can she show them that, just like her friendship with Billy, things are better when everyone is friendly and works together?

Join Sugar on her journey to find family, friendship, and a brighter future when you read Sugar, a beautiful tale of courage, optimism, and determination by Jewel Parker Rhodes!

Sugar is a quick, easy read that is ideal for upper elementary and middle school library and classroom collections. In my opinion, it meets a great need for stories about what life may have been like during Reconstruction. I was especially interested in how the Chinese workers’ stories combined with those of former slaves and how the two groups viewed each other. I don’t think this is something addressed in most social studies classes, so Sugar might become a class novel that supplements studies of Reconstruction and what it looked like in the Deep South.

This book may also lead to some interesting discussions on child labor. I imagine that when a group of ten-year-old students read this book, they will be appalled that Sugar was expected to do so much. This could lead to questions about child labor in the past and around the world today. For these discussions, I would pair Sugar with City of Orphans by Avi, a powerful book about a young boy who sells newspapers in 1893 New York City. Both books are told from differing perspectives, but readers will, I predict, be amazed by how young people were a big part of the workforce in America’s past. My hope is that readers will do further research on how child labor still has a huge–and lamentable–impact on the global economy.