Confession time. I’ve only managed to read six of the twenty nominees for the 14-15 South Carolina Children’s Book Award this summer. I have about a month to finish the other fourteen books…along with all of the other books I’d like to read this summer. It’s not looking good. I can do it, but I’m going to have to really push myself. Will power, especially during the summer, is not exactly my strong suit.

All that being said, I did manage to finish one of the SCCBA nominees this morning, and it packed one heck of an emotional punch. The book was Almost Home by Joan Bauer. I was a little nervous when I first picked up this book. Books with dogs on the cover always make me kind of anxious. (I blame Old Yeller.) In this case, however, the dog was sort of the bright spot in the book, and that little bundle of fur helped to bring light into the life of a girl who was dealing with way too much. 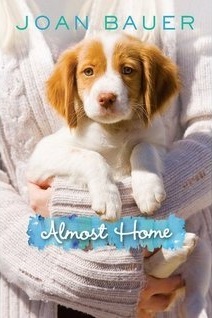 It takes a lot to bring Sugar Mae Cole down. This twelve-year-old tries to always look on the bright side of life, even when things are looking rather dim. And things are about to get pretty dark for Sugar and her mom, Reba. Sugar’s absent dad has gambled away all of their money, and Sugar and her mom are being forced out of their home. Sugar doesn’t know what’s going to happen, but she’s determined to keep her spirits up and be strong for both herself and her mother.

Sugar has a little help along the way. Even when Sugar has to move to Chicago, she keeps in touch with Mr. Bennett, a teacher who encourages Sugar to express herself through writing and to be her best self. Sugar also has Shush, a rescue dog with trust issues of his own. It’s not easy living on the streets or moving from shelter to shelter with a dog in tow, but Sugar is determined to be there for little Shush…the way she wishes someone would be there for her.

When Sugar’s mom shuts down from the stress of everything that has happened, Sugar knows she has to be stronger than ever. Luckily, she’s got Shush…and a chance at a real home when she’s placed with a loving foster family. She’s doing well in her new environment, but the worry about her mother–and her mother’s dependence on Sugar’s no-good father–continues to eat at Sugar’s happiness. Sugar wishes she could do something to open her mother’s eyes, but she knows that Reba must confront the reality of her situation herself.

In this post, I’ve tried to capture just how optimistic Almost Home‘s main character really is. I hope I’ve succeeded. Sugar is definitely a character to be admired. I’m confident that I would not fare so well if I were in her shoes. Even when things were at their worst, Sugar maintained hope that things would get better one day. That’s not to say that she was blind to the realities around her. No, she knew that things were bleak, but she didn’t let that get her down for long. She always found a way to be thankful for the little things, and that’s an example all of us could stand to follow.

I also liked how Sugar explored her situation through her writing. She wrote poems and letters that really highlighted what she was going through. Sometimes it’s easier to write the hard stuff down rather than saying the words out loud. (I know that’s true for me. Why do you think I devote so much time to this blog?) Through poetry, Sugar was able to express how she was feeling. She didn’t always share her words with those around her, but, when she did, they had an impact…especially with the teacher who meant so much to her.

(I’m not even going to get started on Sugar’s connection with her former teacher, Mr. Bennett. If I do, I’ll get all emotional about how teachers don’t do their often thankless jobs for the money. We’ll seriously be here all day if I get on that particular soapbox. Just read between the lines a bit.)

I find it rather odd that two of the books on this years SCCBA nominee list deal with characters named Sugar. What’s really striking is that both books show these girls–in different time periods and with different backgrounds–being forced to act beyond their years. In Almost Home, Sugar faces homelessness and all that entails. In Sugar, our main character is a former slave working on a plantation during Reconstruction. Both girls have to take on adult responsibilities, and both girls do so with spirit and a sense of hope for a brighter future. I think it would be interesting to have a book club or small classroom group read both of these books and draw parallels between these two characters. Yes, they have some pretty noticeable differences, but their similarities, in my opinion, are even more apparent. Something to think about there.

Almost Home is an excellent book for elementary and middle school audiences (and older readers, of course). I’m going to recommend this book to my guidance counselor as well. She knows better than I which of our students are dealing with homelessness, and my hope is that this book could offer those kids a bit of hope when things probably seem hopeless.