In April, I read a moving novel centered around one twelve-year-old boy’s experiences during Hurricane Katrina. That book was Zane and the Hurricane by Rodman Philbrick. Last night, I finished another book that takes a look at how this monstrous storm impacted a young boy. The book is Buddy, a 14-15 South Carolina Book Award nominee by M.H. Herlong. Both books are told from the perspective of twelve-year-old boys, and the boys in both stories have a strong connection with their pets. Those similarities aside, these two books are very different. While Zane and the Hurricane presented a harrowing tale of what it was like to remain in New Orleans during Katrina, Buddy gives a glimpse of what life may have been like for those who left–those who evacuated their homes, often leaving possessions, friends, and even beloved pets behind. 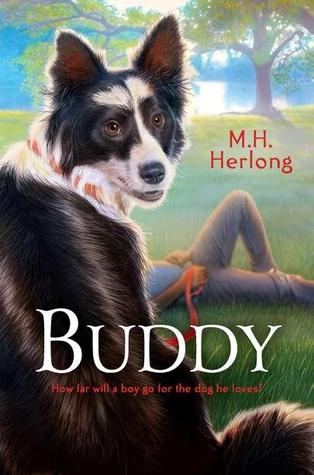 Tyrone “Li’l T” Roberts has wanted a dog forever, but he never quite expected to get one the way he did.

On the way to church one Sunday morning, Li’l T’s dad hits a scraggly, old dog with the car. Even though the family doesn’t have the money to take care of this injured dog, Li’l T is convinced that this dog, who he names Buddy, is meant to be his. With the help of some folks at church, Buddy gets the help he needs, and even though the dog loses a leg, he gains a home with Li’l T.

Li’l T sacrifices a lot to make Buddy a part of his family. He sells his GameBoy so that he has money to buy food for Buddy. He starts mowing lawns so that he can keep caring for his dog. He spends hours talking to Buddy and trying to convince this dog to make the most of his second chance at life. Buddy may only have three legs, but Li’l T knows his dog can do just as much as any four-legged dog around.

Li’l T and Buddy are the best of friends, but something is about to happen that could tear them apart forever. A hurricane named Katrina is bearing down on New Orleans, and the family has to leave everything behind…including Buddy. There’s just no room for him in the family car. Li’l T wants to stay behind with Buddy, but his parents won’t hear of it, so they leave Buddy in an upstairs bathroom with enough food and water for the next couple of days. Surely the storm won’t keep them away more than two days, right?

No one is prepared for Katrina’s path of destruction. This monster of a storm even hits the family’s refuge in Mississippi, and Li’l T soon learns that there isn’t much left of his home in New Orleans. Flood waters have destroyed much of the city, and there may not even be a home to return to.

Immediately, Li’l T thinks of Buddy. Is his dog still locked up in the bathroom? Is he wondering why Li’l T hasn’t come back for him? Has Buddy been rescued, or did Katrina claim one more victim? Li’l T isn’t sure what’s going on, but he’s determined to find out what happened to the dog that became his best friend.

It’s not always easy to keep moving when so much has been taken away from you. Li’l T and his family have lost so much because of Katrina, but they’ve still got each other, and Li’l T has the hope that he will be reunited with Buddy one day. But will their reunion be everything that Li’l T expects, or will he realize that sometimes the only thing you can do is move on?

Read Buddy by M.H. Herlong to see how tragedy brought two friends together, tore them apart, and taught one young boy what true courage and sacrifice really mean.

I freely admit that I didn’t look forward to reading this book. (It was billed as being like Old Yeller. What did you expect?) I did, however, find myself engrossed the more I read. Seeing Li’l T’s journey throughout this book was gratifying, and I think all readers will appreciate how much this character grew and matured throughout the course of this story.

I think Buddy is a great addition to any libraries that serve upper elementary and middle grade readers. There is some mention of gangs, violence, and drug use, but these things were true to the story and what was happening in the aftermath of Katrina.

While Buddy is a good book–and one that I will recommend to my students–I think Zane and the Hurricane is a much better book for those interested in Hurricane Katrina. It just seemed much more authentic to me. (Maybe I’m alone in that. I don’t know.) Hopefully, some of my students will read both books, and we can have some discussions on how each book addressed the storm that changed the lives of so many.

For more information on Buddy and author M.H. Herlong, check out the author’s website.