I’ve never been an outdoorsy kind of gal. Getting in touch with nature? Not my thing. Even as a kid, I disliked being outside, and I hated being forced to read books that had a big focus on nature. The books that stand out the most are Island of the Blue Dolphins, Hatchet, and Julie of the Wolves. I know these are great books, but they just didn’t do it for my younger self.

It should surprise no one, then, that I was rather reluctant to read my latest book, Summer of the Wolves by Polly Carlson-Voiles. Pitched as “Julie of the Wolves meets Hatchet,” I was almost immediately turned off. If this book were not a nominee for this year’s South Carolina Children’s Book Award, I never would have picked it up. (I did put it off as long as I could.) When I finally started the book, it was rather slow going. I found any excuse I could think of to put the book down. Eventually, though, I made myself sit down and read, and I was pleasantly surprised by how much I liked this book. Now, I’ll never be a nature-lover, but I did appreciate this story and the main character’s quest to find her place in the world. 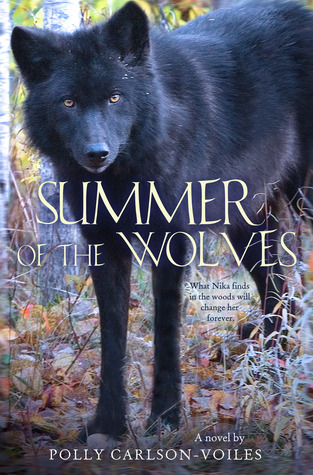 Twelve-year-old Nika should be used to change by now, but nothing prepares her for leaving her latest foster home in California and spending the summer in the wilderness of Northern Minnesota. Nika and her little brother are staying with an uncle they’ve never met in a place that is totally unfamiliar. Nika’s brother, Randall, seems excited about this new adventure, but Nika is anxious. She wonders why her uncle never contacted them before now, how he feels about caring for two kids all summer, and what will happen to them when the summer ends.

Something happens, though, that gives Nika a sense of purpose in her new surroundings. Nika and her uncle find an orphaned wolf pup and decide to care for him. Nika grows attached to the pup–who she names Khan–and she does whatever she can to make sure the little wolf is healthy and happy. She even entertains thoughts of keeping him for her own.

As Nika cares for Khan and learns more about wolves and the wilderness around her, this lonely girl finds herself growing closer to her uncle and making something of a life for herself in Minnesota. For the first time since her mother’s tragic death, Nika feels like she belongs somewhere.

But what will happen when Nika realizes that she and Khan can’t stay together? Will separation from the wolf pup erase everything Nika has come to love about this place? Can she accept Khan’s fate as well as her own?

Read Summer of the Wolves by Polly Carlson-Voiles to learn how one young girl’s relationship with a wolf pup helps her discover her own inner strength, her connection to nature, and what being part of a family really means.

The synopsis above is not one of my best, and I don’t think it captures even a fraction of what occurs in Summer of the Wolves. This book, while exploring the complicated life of one girl, also highlighted the plight of wolves and other wild creatures. Where does one draw the line when it comes to studying and appreciating wild animals and leaving them alone? (Anyone familiar with the controversy surrounding SeaWorld knows this is a big issue.) Maybe this book and others like it will help young readers examine their own interactions with animals and learn more about how they can help wild animals around the world.

Summer of the Wolves could be a good novel study for upper elementary or middle grade classes. I see it supplementing science units on animal behavior and habitats. Reading this book could lead to extensive studies of wolves in the northern United States. (I do wish this book had included a “further reading” section for students who wanted to learn more about wolves. There is a little more information on the author’s website, including a Common Core teacher’s guide to this book, but something more accessible to students would be nice.)