Caution! It is absolutely necessary to read all of the I Am Number Four (aka Lorien Legacies) series if you plan to pick up Hidden Enemy, an anthology of novellas 7-9 in The Lost Files. Here’s a handy reading list for those new to the series:

Spoilers ahead! If you haven’t read through The Fall of Five, turn back now! (Also, I’m not going do much explanation of back story. If you’re not already familiar with the series, you’ll probably be lost.)

If you’ve read my post on The Fall of Five, you probably know I was a tad frustrated with how things ended. If you read the actual book, you likely share my frustration. Well, in Hidden Enemy, we get a little more information on what made Five the person he came to be. 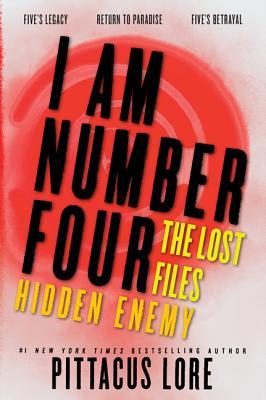 The first story, Five’s Legacy, gives readers a look at Five’s early life. We see him with his ailing Cêpan (guardian/trainer), Rey, as they move from place to place in an effort to stay healthy and evade the Mogadorians. Five is not happy with his life of isolation, and he’s sure the other members of the Loric Garde are together and training without him. His legacies (special powers) haven’t manifested yet, and he’s getting a little tired of waiting. Finally, though, when things seem most hopeless, Five begins seeing evidence that his legacies have arrived. He’s telekinetic, and he can fly. Those powers will serve him well as he tries to make a new start. That new start will, unfortunately, deliver him right into the hands of those that Rey tried so hard to protect him from. Five is insecure and vulnerable, and certain people know just how to take advantage of that. They play on Five’s feelings of powerlessness and promise him a future that looks brighter than anything he could have imagined. The price? He’ll have to turn his back on his own people…

Return to Paradise, the second novella in this book, is told from the perspective of Mark James. You may remember him as the jock who made Four’s life miserable. He was also Sarah’s ex-boyfriend. Well, you may also remember that he had a rather huge change of heart during the battle at the end of I Am Number Four. This story picks up during the aftermath of that battle. Mark can’t really go back to how things were before. He knows too much now. How can he be expected to care about partying when evil aliens are bent on enslaving humans and destroying the planet? He knows more is going on than the public is aware of, and the only person who he can talk to is Sarah, a girl who is still maddeningly hung up on her alien boyfriend, the guy who dragged them into this mess. Mark also does some investigating of his own, and he discovers that the Mogadorian threat goes deeper than he realized. Can he, a mere human, do anything to stop this? And what will happen when Four returns to town and Sarah goes missing? Is there any way Mark can help Sarah and the Lorien cause?

Finally, in Five’s Betrayal, we return to Five’s story. He’s now in the “belly of the beast,” so to speak. He’s becoming more powerful by the day, and he’s earning the notice and respect of the very beings he was always taught to despise. Five is studying war tactics and Mogadorian history, and he knows that the Loric Garde have no chance to best their enemies. His solution? Join the enemy and gain more power than he ever thought possible. The Mogadorians have given Five more attention and freedom than he ever enjoyed as one of the precious Garde, so he’s willing to do whatever it takes to stay in their good graces. Even if that means sacrificing the only friend he has left in the world…

The highlights of this anthology were, obviously, the first and last novellas. They shed some light on the character of Five and let readers know why he made the decisions he did. I still don’t like Five, though. I think he’s a self-indulgent cry baby. (Maybe I’m being too harsh.) He allowed others to prey on his weakness, and he lost all ability to think for himself. He fell victim to Mogadorian propaganda and didn’t question the line of bull he was being fed. It was all I could do not to scream at him the entire time I was reading his story. (I may be reacting so strongly to this because I read the book during election season. It’s way too easy to see the parallels.)

At any rate, I’m now more than ready to dive into the next full-length novel in this series, The Revenge of Seven. It’s sitting on my coffee table right now, just waiting on me to pick it up. After I finish one more read-in-progress, I’ll journey once more into the fight between the Loriens and the Mogadorians. From what I’ve heard, there will be just one more book after this one, so I’m sure The Revenge of Seven will illicit the same response that The Fall of Five did. I’ll likely want to hurl it across the room at the end. I’ll let you know how it goes.