Most of the books that I’ve read through NetGalley have been fairly good. Some have been stellar (The Kiss of Deception, We Were Liars, The Fourteenth Goldfish, Gracefully Grayson, and others). Some have been less so. (I won’t link those because…well, I don’t want to.) The book I just finished, in my most humble opinion, falls into the latter category.

Inked by Eric Smith has a really interesting premise–tattoos that determine one’s destiny–but the book itself just didn’t grab me. I found it really easy to put aside, and it took me over three weeks to finish. Now, some books take a while because I want to savor every page. This one wasn’t like that, at least for me. Maybe you’ll feel differently. (If you do, let me know in the comments. I welcome a good argument!) 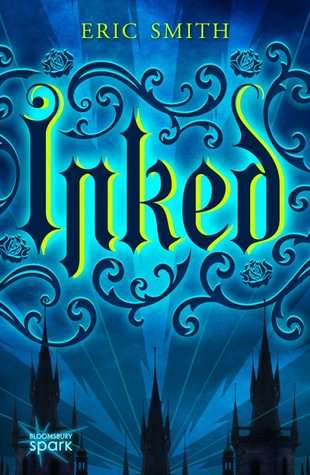 Caenum’s life is on the verge of great change. His birthday is approaching, and that means that he’ll soon receive his Ink. In Caenum’s world, Ink determines destiny, and he is nervous about the magical tattoos he’ll end up with. So nervous, in fact, that he is considering leaving everything behind to avoid being Inked.

Before Caenum can go through with his plan to run away, though, something happens that will make Caenum question everything he thought he knew about himself, his family, his friends, and the world around him.

After angering the Scribe tasked with giving Caenum his Ink, events are set in motion that reveal that the entire Inking process isn’t at all what it seems. Ink is a way to keep people under the Citadel’s iron control, and there are some that want to see that control come to an end.

Caenum and some friends, after witnessing the destruction of their homes and families, go on the run from the Citadel. During their journey, it becomes clear that Caenum and his friends possess the special abilities that make them so dangerous to the Citadel and all those who fear magic. Caenum can control the earth; Dreya, Caenum’s best friend, is a healer; and Kenzi, the very Scribe that was supposed to give Caenum his Ink, has the power of lightning. What do these powers mean, and why are they so important to and feared by the Citadel?

As Caenum and company journey toward an uncertain future, they encounter both friends and foes…and it is often difficult to differentiate between the two. One thing, however, is certain. Caenum’s world is changing in ways that he never expected, and he’ll have to step up and make some hard decisions in order to make his own way in the world.

Who will try to stop Caenum’s quest for freedom? Who will work with him? Who will be sacrificed in the battle to come, and will those sacrifices work for the good of Caenum’s world…or its eventual demise?

I think if Inked had been a little more fleshed out, I would have enjoyed it a lot more. It just felt too rushed for me. Yes, it was action-packed, and I think many readers will enjoy that, but I wanted to see more. More character development, more explanation of the Inking process, and more back story would have made an okay story into a spectacular one.

Given how Inked ended, I’m sure we can expect further installments from Caenum and friends. Hopefully, future books will address the issues I had with Inked. I guess we’ll just have to see.