If you haven’t read Dorothy Must Die or the first prequel novella, No Place Like Oz, I urge you to do so before reading prequel novella #2, The Witch Must Burn. That is all.

Welcome to my new obsession. I have quickly fallen in love with Danielle Paige’s Dorothy Must Die series, and that adoration only continues with The Witch Must Burn. It is absolutely fascinating to see the political maneuvering and machinations behind Dorothy’s rise to power upon her return to Oz. Yes, Dorothy is horrible, but she’s not the only one. In The Witch Must Burn, we get a closer look at Glinda, who seems to have forgotten that she’s supposed to be a “Good Witch.” The lines between Good and Wicked aren’t exactly clear anymore. 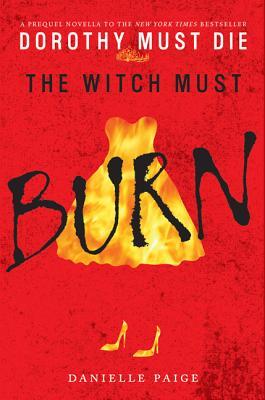 Jellia Jamb has lived in the royal palace of Emerald City as long as she can remember, and she’s worked her way up to the position of head maid. Jellia has seen lots of changes during her time at the palace, but the current state of things give her cause for great worry.

When Ozma, the land’s true leader, was in power, life was idyllic. Now that Dorothy’s in charge, however, things are different. Everyone walks on eggshells, people are punished–and often disappear–because of the smallest infractions, the Scarecrow is conducting strange experiments, and much of the magic has gone out of Oz.

Jellia, who has her own magical abilities, does what she can to ease the way for herself and the other maids, but a mighty force soon realizes that Jellia’s gifts may be more powerful that even she realizes. Glinda sees something in Jellia, something she can possibly use to mine the magic deep within Oz’s core.

Glinda borrows Jellia from Dorothy and spirits her away to her own estate for the summer…a summer that will throw Jellia into a situation more dangerous than she ever could have foreseen. She’ll learn that Glinda is the real force behind Dorothy’s rise to power, and she’s working to gain more magic and control than ever before. Jellia will also discover that a revolution is in the works…a revolution that is trying to restore Oz to its former glory.

Jellia is now in a position to help those who seek to put an end to Glinda’s–and Dorothy’s–reign of terror. Is she willing to trust these people–the Revolutionary Order of the Wicked–who know more about Jellia than she does herself? Will she put her fate and that of Oz in their hands? And what may she learn about herself and her own abilities in the process?

Join Jellia, a seemingly simple maid, as she navigates the power struggles in Oz. What can she do to turn the tide? Read The Witch Must Burn to find out!

I’m so glad this novella is told from Jellia’s perspective. We see this character in Dorothy Must Die, and, by the end of that novel, we know that she plays a much bigger role than originally thought. It’s wonderful to see how that role developed. Given what happened at the end of Dorothy Must Die, though, I wonder how much intel Jellia was able to gather and how that will help Amy Gumm and the Order overthrow Dorothy, Glinda, and their associates. That’s something to ponder before the second novel, The Wicked Will Rise, comes out on March 31st.

Before we get to The Wicked Will Rise, there’s still one more prequel novella to dive into. The Wizard Returns is next on my to-read list, and I will begin reading it as soon as I finish a couple other reads-in-progress. The Wizard has made appearances in the other Dorothy Must Die stories, but his loyalties and motives have been a little suspicious. I’m hopefull that The Wizard Returns will clear things up a bit. We’ll just have to see.

For more information about The Witch Must Burn and the other Dorothy Must Die stories, visit author Danielle Paige on Goodreads, Twitter, or Facebook.