Forgive me if this post is not quite like others I’ve done. I’m writing this while attending an online meeting for webmasters in my school district. This is the only “free” time I have, so there you go.

A couple of days ago, I finished another of the 2015-16 South Carolina Children’s Book Award nominees. The book was Anna Was Here by Jane Kurtz.

Anna Was Here is a book that, in my opinion, will appeal to many readers in elementary and early middle school. What’s more, I think this book may have a place in many church libraries. (That’s not something I often say about the books I read.) 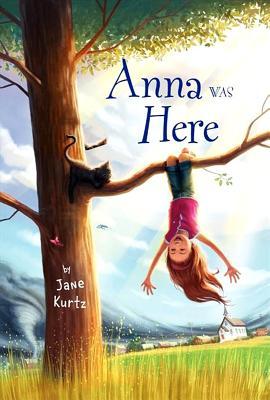 Anna Nickel is a safety expert. She knows just what to do if disaster strikes near her home in Colorado. There’s one big problem, though. Her family is moving to Oakwood, Kansas for a while. (Her dad is a preacher, and he’s been asked to help out an ailing church in his hometown.) Anna doesn’t know a lot about Kansas–and she doesn’t really want to. She’s not happy about the move, and she hopes that she’ll be back in Colorado before her birthday. Well, Anna may not get her wish.

Life in Kansas is much more complicated that Anna thought it would be. She’s encountering family members she’s never met. Her dad is totally wrapped up in the church, her mom is too busy to write, and, worst of all, Anna’s room is pink! Anna also seems to be instantly loathed by one of the kids nearby…who happens to be one of her distant cousins.

Eventually, Anna finds a few things to like about her temporary home. She’s connecting with her dad’s family (something she’d never done before), and she’s learning about farming, emus, and how one should stay safe in all sorts of situations…including tornadoes. There are still many things she doesn’t like about Kansas–the time her dad spends at church, missing her family and friends in Colorado, going to a new school, or her pink room–but maybe it’s not all bad.

When disaster hits Oakwood, Anna must put everything she knows about safety to work. She must come together with everyone in this new town to find something very valuable to her. In the process, Anna learns just what it means to be part of a community. She realizes that others will do whatever they can to help her…simply because it’s the right thing to do.

Join Anna as she discovers more about her family, her faith, and herself when you read Anna Was Here by Jane Kurtz.

I really, really wanted to like this book. I liked parts of it, but much of the book felt a bit jumbled to me. It was difficult to follow what was going on sometimes, particularly with many characters being introduced fairly quickly. It was hard, in particular, to keep all of Anna’s aunts straight. I’m still not sure who’s who.

One other issue I had with this book was the character of Simon. We saw glimpses of him and got to know a bit about his background, but his part of the story felt unfinished to me. There’s no resolution between Simon and Anna. He kind of fades into the background at the end of the book, and that bothered me. If he’s so important that Anna wants to learn more about him–and even try to get revenge for his actions toward her–then he’s important enough to warrant some kind of ending, happy or not.

I don’t know that my students will feel the way I did about this book. I’m sure many of them will enjoy it, and, since it’s on the Children’s Book Award list for my state, I’ll promote it to all of my 3rd-5th graders. (Do I think this book should be on the SCCBA nominee list in the first place? Well, I may not mention my feelings on that to my students.)

I do think this book has a place in many church libraries, even though Anna does get kind of angry at God and question why he does (or doesn’t do) certain things. (Whatever faith you practice–if any–I’m sure you can probably relate to that sentiment in some way.) In the end, though, Anna does begin to reconcile her faith with the situation around her, and she finds a way to make peace with everything that has happened.