Yesterday, the brilliant Cassandra Clare and Robin Wasserman gave us another gripping story in Tales from the Shadowhunter Academy. The Evil We Love is the fifth story in this collection. If you’ve got a bit of catching up to do before installment #5, the first four stories are Welcome to Shadowhunter Academy, The Lost Herondale, The Whitechapel Fiend, and Nothing But Shadows. 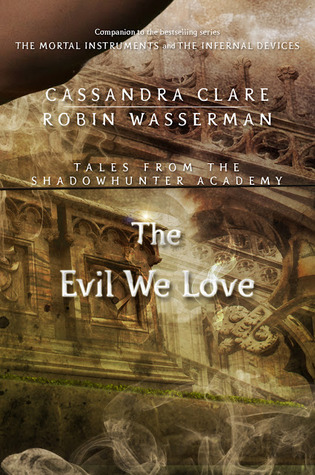 In The Evil We Love, readers see Simon Lewis near the end of his first year at the Shadowhunter Academy. It has not been easy for him this year, but he’s definitely learned quite a bit about what it means to be a Shadowhunter…both the good and the bad. Simon is stronger, his memory is returning, and he feels like he might actually have a place here. But all that could change when Isabelle Lightwood strolls through the Academy doors once again…

Isabelle hasn’t arrived at the Academy alone, though. She’s with her father, Robert Lightwood, also known as the Inquisitor. He’s speaking to the Academy students about Valentine and the origins of the Circle. He talks about his own involvement in the group, his conflicted feelings at the time, and how easy it ultimately was to relinquish control to Valentine.

Valentine was a charismatic leader that recognized the vulnerabilities in those around him, and he exploited those supposed weaknesses to get others to do his bidding. He had an agenda that would place Shadowhunters, particularly those who agreed with him, at the top of the food chain–above Downworlders and mundanes alike. Anyone who got in his way–including those close to him–would regret it.

While Robert Lightwood is trying to tell the Academy students about the beginnings of Valentine’s circle and how someone so evil could come to be so loved, Isabelle seems intent on stirring up trouble. She’s flirting with Simon’s nemesis, trying to get the other students to sneak out and break rules, and letting Simon know that he’s no longer part of her life. As for Simon, he may not remember most of his time with Isabelle, but he does remember some of his feelings for her, and her current behavior is destroying him.

Simon wants no part of whatever game Isabelle is playing, but he does still care about her…and his fellow students. He needs to figure out what’s happening here–and put a stop to it–before things really get out of hand. But what’s really going on? Is there more at work than meets the eye? And what could it all mean for Simon, Isabelle, and any possibility of a future together? We’ll just have to see…

The Evil We Love alternates between Simon’s experiences at the Academy and Robert Lightwood’s time there in 1984. Even though the reader may not immediately realize it, the two perspectives do intertwine.

We see just what Valentine was like through Robert’s eyes. We also learn much more about Robert, what was important to him, and how he was manipulated by his own weaknesses. Valentine took advantage of Robert–as he did with so many others–and essentially took over his life. Robert, coward that he was, allowed it. He also lost one of the most important relationships in his life, the one with his parabatai, because of his own cowardice–an action that can’t be placed at Valentine’s feet.

Robert Lightwood has many regrets that shine through in this story, but, in my view, he’s attempting to use his experiences to keep the same thing from happening again. He’s also trying to mend fences with his daughter, no easy task with someone as strong-willed as Isabelle. Is he able to accomplish all of this during his brief time at the Shadowhunter Academy? Well, his methods are at once cruel and brilliant, and while he might get one point across, I think he may have a bit more work to do with Isabelle.

Isabelle, for her part, kind of drove me a little bonkers in this story…before I figured out what was really going on. I hated what she was seemingly putting Simon through (even though I totally get why she would want to), and I just wanted to reach through the pages and force them to kiss and make up. If only…

I guess that about does it for this installment of Tales from the Shadowhunter Academy. As for how The Evil We Love stacks up against the other stories, I can’t say that it was my absolute favorite. That honor goes to either The Whitechapel Fiend or Nothing But Shadows. I can say, though, that it was entertaining, enlightening, and it has me eager for more.

Speaking of more, the next story in this collection, Pale Kings and Princes, will be out on July 21st. In this one, we’ll learn a bit more about Andrew Blackthorn and the events that led to the births of his half-faerie children, Mark and Helen. I can hardly wait!