Notice: If you haven’t already read the collected works of Cassandra Clare, especially the entire Mortal Instruments series and the first five stories in the Tales from the Shadowhunter Academy collection, you’ve got some work to do. Today’s post, a quick look at Pale Kings and Princes, the sixth story in the Shadowhunter Academy series, builds on what’s happened in past books…and gives a peek at what we may see in Lady Midnight.

It should come as no surprise to regular followers of this blog that I’ve already read Pale Kings and Princes (which came out today). I am slightly obsessed with Cassie Clare’s work, and I tend to devour everything she cares to publish. This latest Shadowhunter Academy story is no exception. Given that it relates directly to what will likely happen in Lady Midnight, the next full-length Shadowhunter novel, I am especially intrigued.

Now, if you’ve read the synopsis of this story on Goodreads or even Amazon, I have a bit of advice for you. Ignore it. Just about the only thing it got right is that we learn more about Andrew Blackthorn, his time with the faeries, and the birth of his children, Mark and Helen. Luckily for you, I’m here to get things right. Let’s jump in… 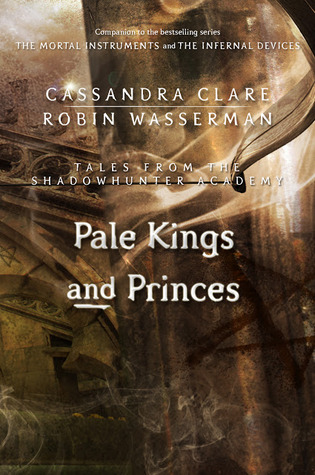 After a rather uncomfortable summer at home in Brooklyn, Simon Lewis is back for his second year at Shadowhunter Academy. Here, he doesn’t have to pretend to be “normal,” to put on a show for those who have no idea what kind of school he’s really attending. There’s freedom in not having to hide, a freedom that not all in the Shadowhunter world share, unfortunately…

In one of his first lessons back at the Academy, Simon and his fellow students meet Helen Blackthorn. Apparently, she’s been “asked” by the Clave to teach the Academy students about the perils of tangling with faeries.

Helen relates the story of how her father and his brother were ensnared by the Seelie Court and how she and her brother, half-fae, came into the world. Her tale is not a happy one, and Simon comes to understand that this is not something Helen wishes to talk about. The Clave is forcing it on her. Why? Well, part of it is to punish Helen for her faerie blood (which is not something she can help), and a bigger part is propaganda in the Clave’s increasing tensions with the faeries (many of whom took Sebastian’s side in the Dark War).

Simon is horrified on Helen’s behalf, and he’s outraged that the Clave would punish an entire race of Downworlders because of the actions of a few. Simon quickly learns, though, that he’s one of the few who feels this way.

In addition to what he’s discovering about Shadowhunter/faerie politics, Simon is also dealing with his own personal turmoil. He’s making a right mess of his relationship with Isabelle, and he’s sure that one wrong move will tear them apart once again. Fortunately for Simon, Isabelle isn’t one who gives up easily…

After reading Pale Kings and Princes, I am even more eager for Lady Midnight, particularly when I consider what was revealed at the end of this story. (I’m not going to give anything away, but I will say that it could play a big part in all the faerie drama to come.) Sadly, Lady Midnight won’t be out until March 8th, so I’ve still got quite the wait ahead of me. At least I have the Shadowhunter Academy to keep me occupied.

I’m rather enjoying the unique perspective Simon brings to the world of Shadowhunters. He’s been a Downworlder, so there’s that to consider…but he’s also just a regular kid from Brooklyn. Simon makes connections to the world and historical events–especially treatment of Jews in World War II–that other Shadowhunters may not consider. He draws parallels between the Holocaust and current treatment of faeries that are rather disturbing, and he tries to help those around him see that the Clave is on a dangerous path. Will anyone listen to him? Well, I can’t really answer that, but I think you’ll agree that he makes some valid points.

When you add up the origin story of Mark and Helen Blackthorn, Simon’s outrage over their treatment, and, yes, the continuing drama of the Simon/Isabelle relationship, Pale Kings and Princes delivers yet another winner in Tales from the Shadowhunter Academy. I, for one, am ready for the next installment.

Speaking of the next installment, it is titled Bitter of Tongue and will be released on August 18th. According to Goodreads (which may or may not be accurate), Simon will encounter Mark Blackthorn and the Wild Hunt in this story. I really hope that’s true.

2 comments on “Pale Kings and Princes”