I’ll dispense with the pleasantries. At this point, if you haven’t read all of the Shadowhuntery goodness by Cassandra Clare, stop whatever you’re doing and correct that situation. (Also, I’m silently judging you from the comfort of my desk chair.)

Now, let’s move on to the seventh installment in Tales from the Shadowhunter Academy, Bitter of Tongue… 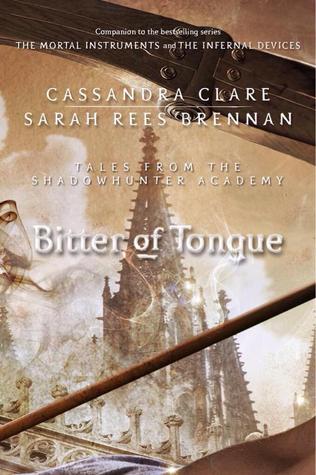 In Bitter of Tongue, we continue to follow Simon Lewis, former vampire, through his second year at the Shadowhunter Academy. Things seem to be going well for Simon. He’s stronger and happier than he can remember being. (Given the state of his memory, I’m not sure how much that says.) His relationship with Isabelle Lightwood is starting anew, and he’s coming to terms with his future as a Shadowhunter.

Or so he thinks…

While on a mission to capture a faerie, Simon unwittingly finds himself thrown into the faerie realm. He is imprisoned, and his only hope of escape comes in the form of Mark Blackthorn, former Shadowhunter and current member of the Wild Hunt.

Even though the Clave (the Shadowhunter “government”) has essentially turned its back on Mark because of his faerie blood, he decides to help Simon escape…but not without first sharing a bit of his pain and misery over being separated from his family.

Simon takes in everything Mark says, and he vows to do something about it. He’ll not only keep an eye on Mark’s family, but Simon will also work to change how Shadowhunters view themselves and others. He won’t simply accept that the Shadowhunters are all-powerful or superior to mundanes and Downworlders. Not anymore.

Simon is reawakening to the truth of his new life, and he may have some powerful allies on his side. Will they be able to make a difference? Time will tell…

When I first started reading Bitter of Tongue, Simon really bothered me. He wasn’t his usual snarky, sarcastic self, and I didn’t like the change. Luckily for me (but maybe not for him), that didn’t last long. I guess being captured by faeries will do that to you. By the end of this story, Simon was back to seeing Shadowhunters as they are instead of how they should be. The rose-colored glasses were off once more, and Simon realized that battling prejudice remained a huge problem with Shadowhunters.

I’m sure I’m not alone in this, but I loved seeing more of Mark Blackthorn in this story, even though what I saw was heartbreaking. Seeing the Blackthorn siblings through Mark’s eyes brought tears to my own and made me even more eager to read Lady Midnight, the first book in the highly-anticipated Dark Artifices trilogy (due out on March 8th, 2016).

Before we get to Lady Midnight, though, we still have three more installments in Tales from the Shadowhunter Academy. Story #8, The Fiery Trial (released on September 15th), involves the parabatai ceremony of Emma Carstairs and Julian Blackthorn. Story #9, Born to Endless Night (out on October 20th), features my favorite warlock and yours, Magnus Bane! The tenth and final story, Angels Twice Descending (expected on November 17th), is the tale of Simon’s Ascension and should be quite the nail-biter. I can hardly wait!

If you, like me, love the world of Shadowhunters and want to learn more, you may want to check out Shadowhunters.com and the ABC Family site for the upcoming Shadowhunters TV show. Exciting stuff!