It seems fitting that a book like The Fall should be released during National Suicide Prevention Month. This latest book from James Preller is out today, and it takes a look at one boy’s reaction to a classmate’s suicide.

While The Fall is a quick read, I think it forces readers to examine their own actions and reactions to things that are happening in schools, on social media, and everywhere in between. If this book can help just one person to be a little kinder, then it’s done its job. 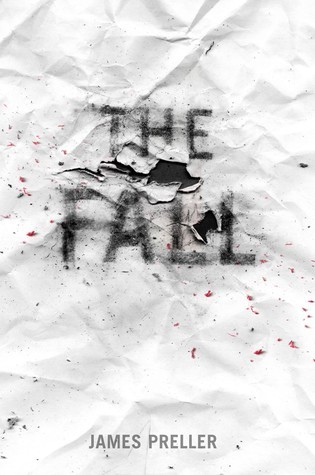 When Morgan Mallen jumped off the town water tower, Sam was forced to take a long, hard look at himself and his actions (or inactions, as the case may be). Everyone knew that Morgan had been bullied relentlessly at school and online. Even Sam participated. What everyone didn’t realize was that Sam knew Morgan. He was perhaps one of her only friends.

Why, then, did Sam take part in tormenting Morgan even though he knew it was wrong? Why didn’t he want anyone to know they hung out? Was he partly to blame for her suicide, and could he have done anything to prevent it?

Sam explores his friendship with Morgan and the aftermath of her suicide through writing in a journal. He’s brutally honest with himself about his relationship with Morgan, his own weaknesses, and his part in this tragedy.

Sam knows that he wasn’t the only one making Morgan unhappy–and on some level, he realizes that Morgan’s decision was her own–but he’s struggling with all of the events that led up to that fateful day. Why was she bullied in the first place? Could anything have stopped Morgan from ending her life? Why did she feel she had no other option?

As Sam works through his feelings and all of the questions plaguing him, he comes to understand that, even though he can’t change what happened with Morgan, he can change his own behavior. He can do whatever possible to somehow make amends. He can confront those who were the worst offenders and own up to his own mistakes. And he can try to be kinder to everyone around him. After all, no one really knows what demons someone is battling. A little bit of kindness could make all the difference in the world.

I think The Fall and other books on the subjects of suicide and bullying are vitally important to young people (and even adults). These books make us examine what we say and how we act toward others. We really never know how one cruel or kind word can impact the people around us.

I would pair The Fall with Jay Asher’s Thirteen Reasons Why to give a gritty glimpse at the aftermath of a person’s suicide. Some parents may not be entirely comfortable with the subject matter, but it’s something that will likely touch their children in some way. I’d much rather a young person explore this topic through fiction than have to face the horrible reality. (A friend of mine committed suicide when I was in the 8th grade. It would have been nice if I’d had a book that let me know that I was not alone.) For that reason, I would recommend this book for libraries that serve both middle grade and teen readers.

For those who’d like to learn more about The Fall, visit author James Preller’s website. And if you or anyone you know is contemplating suicide, please get help. Talk to someone–a parent, a friend, a guidance couselor, a librarian, a religious leader, someone. Go to the National Suicide Prevention Lifeline or It Get’s Better. You are not alone, and things will get better.