I realize I’m late to the party on this one, but here goes…

Thanks to the faculty book club at my school, I finally made time to read Coraline by the genius Neil Gaiman this week. (We’re reading children’s books that have been made into movies.) I don’t know why it took me so long to read this book, especially considering how much I adore Gaimain’s other works (especially The Graveyard Book and American Gods). The important thing is that I did read Coraline…and it’s now right up there with my favorite children’s books. It’s a thoroughly captivating, haunting read with just enough of the macabre to keep readers young and old both creeped out and totally enthralled. 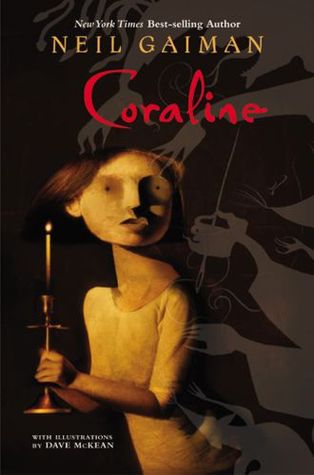 Coraline Jones is somewhat unhappy with her life. She and her parents have moved into a new place, her parents often ignore her, her father is always trying out weird new recipes, and she’s often bored. Well, her boredom is about to end… in a very unexpected way.

When Coraline goes exploring in her new home, she discovers a door that doesn’t lead anywhere. When she opens it, all she sees are bricks. One day, though, Coraline opens the door to find a strange corridor leading to an almost mirror image of her own home.

Coraline notices some differences between her home and this other place. The toys are magical, the food is wonderful, and things are never boring. And then there’s other mother and other father. These alternate versions of her parents have black button eyes and want Coraline to stay with them forever.

While Coraline may have a fleeting thought of staying in this other place, she soon realizes that all is not happiness and light here. Other mother will do anything to keep Coraline with her, and Coraline must use all of her wits and daring to escape this odd creature’s grasp…and save her parents, other souls trapped in this eerie world, and her own life.

Will Coraline be able to outsmart the crazed, determined other mother and get back to her ordinary world? What will she realize about herself and her life in the process? And who will help in her quest…or get in her way?

This weekend, I plan to devote a couple of hours to watching and reflecting on the movie adaptation of this truly outstanding book. I’ll also take a look at the graphic novelization as soon as I can. (My students tend to keep that one checked out, so that might take a while.)

I don’t know how the movie or graphic novel will stack up, but it’s safe to say that Coraline has now become one of my top recommendations for those looking for a spooky read. I’d say it’s ideal for rainy days, dark nights, and the Halloween season. A winner for readers of all ages!