If it’s not already clear, today I’ll be focusing on the fifth novella in Danielle Paige’s Dorothy Must Die series, The Straw King. For those who are not caught up on this stellar series–which tells what happened after Dorothy left Oz (and then returned again)–here’s what you need to read to get on track:

And now we move on to The Straw King. As you’ve probably guessed, this story centers on the Scarecrow, one of the most beloved characters in The Wizard of Oz and, truthfully, one of the most horrific in the Dorothy Must Die series (and that’s saying something). 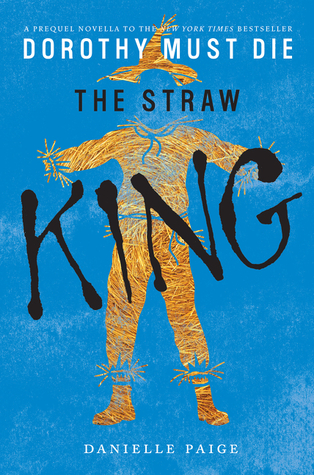 All he ever wanted was a brain. He never asked to be the King of Oz. It just sort of happened after the Wizard and Dorothy left. Now, though, the Scarecrow is trying to learn all he can in order to be a great, respected, and brilliant ruler. He’s reading every book he can get his hands on, but his precious books may not give him everything he needs to face the coming threat to his throne.

When Jinjur, a young warrior with a vicious army of formidable girls behind her, attempts to overthrow the Scarecrow, all he knows to do is go on the run with the Lion. He needs time to think about the best way to take back his throne, but time is something he may not have. Jinjur is laying waste to his people, killing anyone who dares to oppose her. The Scarecrow looks to the Lion for help, but it may not be enough. Is there any way to defeat this threat to the Scarecrow’s place in Oz?

Assistance arrives in the form of Glinda. Almost immediately, the Scarecrow realizes that Glinda is making her own mad grab for control, but if he can use the “Good” Witch to gain a bit of his power back, he will. He’ll just have to keep an eye on her and play her games while continuing to gather knowledge that will further his own agenda.

And just what is the Scarecrow’s agenda? To learn as much as possible, of course…and by any means necessary.

Even though the Scarecrow is one of the creepiest character’s in the Dorothy Must Die series, I almost felt sorry for him at the beginning of The Straw King. What’s more, I even related to him. He just wanted to read and take in as much information as possible. Knowledge is power, after all.

That, however, is where my sympathy ends…

It seems that the Wizard’s gifts were not without their dark sides. (We saw some of this in Heart of Tin and I’m sure we’ll see more when we get to the Lion’s story.) Once the Scarecrow gets a taste of power, he wants to keep it, but circumstances get in his way. He eventually learns to use those circumstances to his advantage, leading him to essentially become a mad scientist, someone capable of truly atrocious acts. Yes, he still pursues knowledge relentlessly, but his methods are the stuff of nightmares.

The Scarecrow, though, isn’t the true villain of this piece. No, that honor goes to Glinda (who I never liked in the original story anyway). The woman is psycho, and she’s manipulating everyone in her path. The Scarecrow knows it’s happening, and he’s looking for a way to further his own agenda without Glinda catching on, but I still feel like Glinda’s the one running the show. (That belief is only solidified by the events in the novels.) It’ll be interesting to see how everything plays out in the third full-length book in the series, Yellow Brick War, which comes out on March 15th, 2016.

Before we get to Yellow Brick War, we still have one more novella to look forward to. Ruler of Beasts–the Lion’s story, obviously–should be out on February 16th. Given the Lion’s behavior in the novels, I’m sure this read will be extremely enlightening.

If you’d like to learn more about The Straw King and the rest of the Dorothy Must Die series, you can connect with the wonderful Danielle Paige on her website, Twitter, Goodreads, and Facebook.

With that, I’ll sign off for now. In just a few short minutes, I’m leaving to get in line to see Star Wars: The Force Awakens! I cannot express how excited I am for this movie, and I’m hoping it meets my lofty expectations. We’ll see.

May the Force be with you!