Turn back now if you haven’t read the following books in the I Am Number Four series:

I read I Am Number Four almost six years ago. If I had known that the series would still be going strong all these years later, would I still have picked up this book? Probably. Sometimes, I’m simply in the mood for some alien adventure, and this series definitely delivers.

This weekend, I devoted some time to reading the latest collection of novellas in the I Am Number Four (or Lorien Legacies) series. This collection, Rebel Allies, contains stories 10-12, and it really adds to the series as a whole. 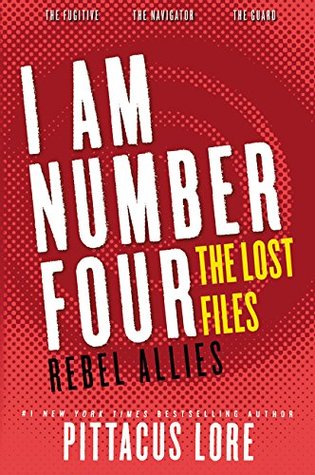 The first story in this collection, The Fugitive, takes a closer look at a familiar character from this series, Mark James. You might remember Mark as the cocky football star–and Sarah’s ex-boyfriend–from the first book, but his life changed drastically when a bunch of shark-faced aliens (the Mogadorians) blew up his high school. Since then, Mark has been trying to figure out exactly what is going on with both the Mogs and the Loric Garde trying to defeat them.

Now, Sarah is missing, and Mark is determined to track her down. He’s sure that she’s either with Four and the Garde, or the Mogs have captured her. He’s not sure which, but he’ll do whatever it takes to find her…even if it means fighting evil aliens and the government agencies aiding them.

Mark, however, isn’t completely alone. A mysterious figure known only as GUARD provides assistance when Mark needs it the most. Who is this guy, and how does he know so much about Mark, the Loric, and the Mogs? Can GUARD be trusted? Well, Mark will soon find out…

The second two stories, The Navigator and The Guard, introduce a fairly new character in this series, the one known to Mark as GUARD. This person has played a part in both The Fugitive and some of the other stories in the series, but these two novellas delve a bit deeper.

Without giving too much away, I will say that GUARD is not a man as Mark assumed. She is a woman, and she is from Lorien. She was there when the Mogs attacked, and she managed to escape to Earth. Now, this brilliant hacker is doing whatever possible to protect her new home from suffering her planet’s fate.

If the series stays true to pattern, the stories of Rebel Allies lead directly into the next full-length novel, The Fate of Ten. This book was released in September, so I plan to dive right in as soon as I wrap up this post. I feel certain there will be one more novella collection* sometime this year, probably before the final book, United As One, comes out on June 28th.

*If you can’t wait for the print version of the next novellas, one of the stories is already out in ebook form, and another is coming next month. Story #13, Legacies Reborn, was released in November, and story #14, Last Defense, will be out on February 23rd. I don’t know yet if there will be a 15th story.

For much more information on this exciting series, go to the I Am Number Four Fans website. Enjoy!