Note: Even though Queen Song is a prequel novella to Victoria Aveyard’s Red Queen, it’s a good idea to read Red Queen first. (Also, Red Queen was published first, so there you go.)

As you’ve no doubt gathered, I recently finished reading Queen Song, the first prequel novella in the fabulous Red Queen series. This short story tells the tale of Coriane, who you may recall was the mother of Cal and was the first wife of King Tiberias. That’s not where her story began, though. Coriane was a simple girl–or as simple as a Silver can be in this world–and she had resigned herself to a somewhat mundane existence. Fate, however, had other plans… 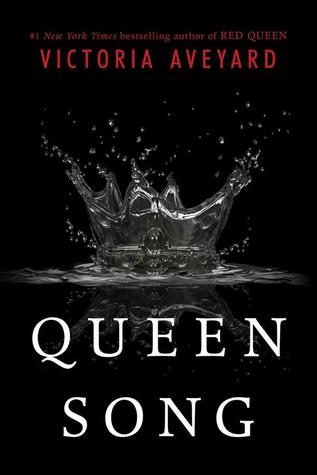 All Coriane has ever wanted is to build things. She delights in taking things apart, figuring out how they work, and putting them back together better than they were before. She spends her spare time poring over technical manuals…when she’s not being forced to suffer through etiquette lessons or the like. As a Silver of somewhat noble birth, she’s expected to take part in the trappings of the royal court, even though she’d rather be doing almost anything else.

One evening at the palace, Coriane comes into contact with two people with the power to change her life forever. First, there is Elara, a girl with the ability to enter–and toy with–the minds of others. Coriane finds herself as Elara’s terrified plaything for several horrible minutes, and she escapes to the relative safety outside. It is here that she meets Tibe, the Crown Prince. The two strike up a conversation…a conversation that Coriane never expects to lead to anything more than an unlikely friendship. It seems that Tibe may have other ideas…

As Coriane and Tibe grow closer together, it becomes clear to everyone that the Crown Prince has chosen his future queen. This puts an enormous target on Coriane’s back, and, even though she has come to love Tibe, she remains fearful of what others may do and expect of her…especially the dangerous and devious Elara.

Documenting her thoughts in a diary, Coriane reveals what it’s like to go from Silver nobody to Queen. Little by little, she feels herself being lost to the world around her. She’s simply not the girl she once was. She fears for the fate of her loved ones–especially her brother Julian, her husband Tibe, and her son Cal–and herself. She worries over the continuing war and what it could mean for her family. And she wonders if the disturbing thoughts in her head are her own.

Is Coriane in control of her own fate, or is someone else whispering deadly thoughts into her mind to further their own agenda? You decide…

Given how Queen Song ended and what happened in Red Queen, I have no doubt as to who was pulling–and cutting–Coriane’s strings. I’m guessing that anyone who’s read either of these stories will come to the same conclusion I did.

Queen Song gives readers a quick look at the early lives of several characters from Red Queen. Readers see what lead to some of their decisions and what continues to drive them. This is particularly true for Cal, Tibe (the King), Julian, Elara, and even Maven. (I doubt I have to explain why.)

Coriane’s story, while often heartbreaking, gives a bit of insight into her relationship with both her brother and the man who would be her husband. It also shows how dedicated Coriane was to her son and having him grow up in a world without the constant threat of war. This young woman wanted a better world for her family, but, sadly, someone else wanted to be in control of that world. (Again, if you’ve read Red Queen, I don’t have to explain anything more.)

I think Queen Song is an excellent addition to the Red Queen saga, and I look forward to reading even more. There is one more novella, Steel Scars, which is already out, and I plan to read that this weekend. The second full-length novel, Glass Sword, comes out next week (!!!), and I’ll get my hands on that as soon as possible.