On Tuesday, the sixth prequel novella in Danielle Paige’s Dorothy Must Die series was released. This story, Ruler of Beasts focuses on–you guessed it–the Lion and what became of him when Dorothy went back to Kansas. Before you read this story, however, you may want to take a look at those that preceded it so that you have a bit of context. Here they are:

Now that that’s out of the way, let’s turn our focus to Ruler of Beasts. If you’ve read any of the Dorothy Must Die books, you now know that there’s nothing cowardly about the Lion anymore. As a matter of fact, he grows to be downright terrifying.

Sure, as the King of the Beasts, the Lion has to be ferocious at times, but he takes things too far. But did he start out that way? After Dorothy left (the first time), how did the Lion adjust to his new courage and power? And who manipulated him into becoming a figure that was feared all over Oz? 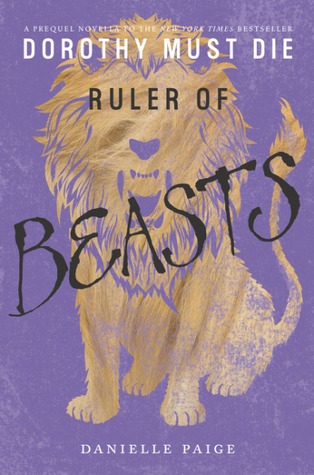 Things haven’t been the same for the Lion since Dorothy left. Yes, he’s now the King of the Forest with loads of courage, but he longs for the adventures he shared with Dorothy, the Scarecrow, and the Tin Woodman. Being a ruler isn’t exactly living up to the hype. He’s bored and looking for something to change.

Change comes for the Lion in the form of Glinda. She needs the Lion for an important mission in the Emerald City. (She’s can’t exactly go herself. She and Ozma, the new Queen, don’t see eye to eye.) The Lion is pretty sure that Glinda isn’t telling him the whole truth, but, after all she’s done for him and his friends, he feels obligated to help her. He’s also looking for a cure to his boredom. So the Lion takes off for the Emerald City and an audience with Queen Ozma.

When the Lion arrives, he’s shocked at how different the Emerald City is. Ozma has changed quite a bit during her short time on the throne, and everything appears to be thriving. The Lion also notices how young and lonely Ozma is. Suddenly, completing Glinda’s mission doesn’t seem nearly as important as being a friend to the new queen.

Soon, however, Glinda isn’t the only one who needs the Lion’s help. Ozma reveals that an ancient threat is headed for Oz, and she asks the Lion for his assistance in facing this potential foe. The Lion isn’t sure what to expect, and this situation makes him feel like his courage is deserting him.

How can the Lion possibly help his new friend when fear is overtaking him? And what will happen when he receives a startling reminder about Glinda’s mission? Could his involvement with Glinda jeopardize his friendship with Ozma? What could Glinda’s plans and his part in them mean for his future in Oz?

Answer these questions and many more when you read Ruler of Beasts, the sixth novella in the Dorothy Must Die series by Danielle Paige.

If you’ve read my posts on the other stories in this wonderful series, you know that the Lion is not one of my favorite characters. His bloodlust is horrifying, and his transformation from a lovable, cowardly goof into a hideous monster is appalling (and really entertaining to read).

In Ruler of Beasts, we get a small glimpse into how the Lion became what he did. Part of the responsibility lies with him. He made choices that led to his current circumstances, but he was manipulated into some of those choices. Like with the Tin Woodman and the Scarecrow, much of the blame falls on Glinda’s shoulders. (I didn’t like her when I experienced The Wizard of Oz as a child. I positively loathe her now.) She’s the one calling the shots, and I really hope she gets her comeuppance in the next book, Yellow Brick War, which comes out on March 15th.

If you’d like to learn more about Ruler of Beasts and the rest of the Dorothy Must Die series before the final (?) book comes out next month, you can connect with the amazingly talented Danielle Paige on her website, Twitter, Goodreads, and Facebook.

I hope you decide to give this outstanding series a try (if you haven’t already). I read the first book less than a year ago, and I’ve been slightly obsessed ever since. It puts a dark, inventive spin on the Oz we all know, and I can hardly wait to read the next installment. March 15th can’t get here fast enough!