Hello, dear readers. I bring greetings from the comfort of my home during my gloriously uneventful spring break. So far, I’ve managed to finish a couple of books, watch way too much TV, and see two rather boring movies. (The movies were Batman vs. Superman and Allegiant. Not impressed with either of those films.)

Anyhoo…let’s move on to one of the books I recently finished, Masterminds by Gordon Korman. This book is another of next year’s South Carolina Children’s Book Award nominees, and it’s the first book in a trilogy. (The second book, Criminal Destiny, is already out.)

I feel fairly certain that the Masterminds series will be a hit with most upper elementary and middle grade readers. It’s full of action, suspense, mystery, a bit of science fiction, and a bunch of kids who discover that their entire lives are basically lies. Good stuff. 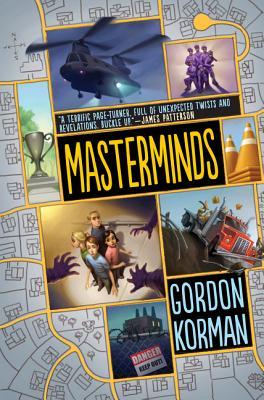 The town of Serenity is a lot like Mary Poppins–“practically perfect in every way.” There’s no crime, no poverty, no conflict of any kind. Every backyard has a pool, and no one really wants for anything. Sure, it’s kind of boring sometimes, but that’s to be expected in a town of only thirty kids. Serenity is almost completely closed off from the rest of the world, and most of the residents like it that way.

One day, Eli Frieden and his best friend Randy decide to do a little exploring outside of city limits. They don’t make it far before Eli is doubled over with some weird illness and rushed back to town. When Eli wakes up, he learns that Randy is leaving Serenity to live with his grandparents. Eli doesn’t really know what’s going on, but he’s sure that Randy isn’t telling him everything…and he’s right.

Eli begins to do a little digging, and he discovers that Randy wasn’t sent to live with his grandparents. But if that’s true, where did his best friend go? Why the big secret? What exactly is happening in this small, seemingly perfect town?

Eli enlists the help of a few friends in his quest for answers, and they begin to uncover the horrible truth about their town. Nothing is what it seems in Serenity, not even their own families. What does all this mean for Eli and friends? And what is the town’s strange connection to some of the most vicious criminals in the country?

Can a bunch of kids find out what’s going on, escape the lies surrounding them, and find help in the world outside of Serenity? Discover the truth for yourself when you read Masterminds by Gordon Korman!

Masterminds will probably not be a hard sell with my students. I won’t have to say much more than “a group of kids figure out that they’re parents are totally lying to them about their whole lives, the kids have to discover the truth, and deal with the fact that *spoilers* they have a weird connection to a bunch of criminal masterminds.” The books will fly off the shelves.

Most of my students–and many others, I guess–enjoy a good book that depicts kids getting the jump on adults, especially when those adults are doing something kind of horrible. I think readers who like Masterminds may also enjoy the Runaways graphic novels by Brian K. Vaughan and others. These books follow the children of supervillains. Awesome.