Last night, I finished one more of the 2016-17 South Carolina Children’s Book Award nominees, A Million Ways Home by Dianna Dorisi Winget. Those who know me can take one look at the book’s cover and figure out why I was a little hesitant to read this one. 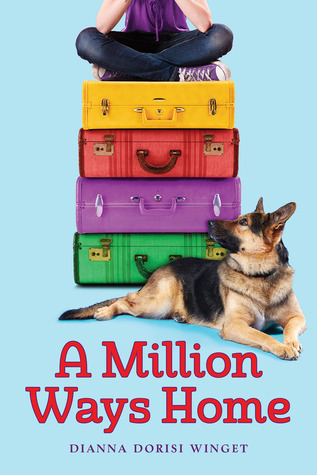 That’s right. There’s a dog on the cover.

Well, I read the book anyway, and I have to admit that I’m glad I did. Though the dog plays a part in things, he’s not the major focus of the book. That honor goes to Poppy, a girl dealing with much more than any kid should be expected to handle.

After Poppy Parker’s grandmother suffers a stroke, the girl is sent to live in the North Shore Children’s Center. Poppy hates it here (with good reason), and she’s willing to do just about anything to reunite with her grandmother…even run away.

Poppy tries to make her way to the hospital to see Grandma Beth, but things quickly turn south. After a brief stop at a convenience store, Poppy becomes the sole witness to a horrible crime, an armed robbery and murder. The suspect knows her face and her name, so Poppy is placed under police protection, specifically in the home of Detective Trey Brannigan and his mother, Marti.

It doesn’t take long for Poppy to feel safe in this temporary home. She likes her caregivers, and she enjoys helping Marti at the animal shelter. She even manages to make a couple of friends–one human and one canine. Lizzie, the human, is a girl with troubles of her own. Gunner, the canine, is a beautiful German Shepherd who isn’t all that different from Lizzie. Both of them need someone to love them and be patient with them, and that person is Poppy.

Unfortunately, things aren’t so simple. There’s still the matter of a dangerous criminal on the loose and looking for Poppy. Also, Grandma Beth isn’t recovering like Poppy hoped she would. Things are looking bleak, and Poppy doesn’t know what to do.

Will Poppy ever be able to return home? Will her grandmother get better? Will the police ever catch the guy putting Poppy in danger? And what will happen with Lizzie and Gunner?

Learn how Poppy navigates through the waters of uncertainty, friendship, grief, and love to find her way home when you read A Million Ways Home by Dianna Dorisi Winget.

A Million Ways Home is a quick, moving, and entertaining read that is sure to appeal to upper elementary and middle grade readers. Readers will empathize with Poppy and wonder what they would do if placed in similar situations.

If I had one complaint about the book, it would be that it is too “busy.” There’s already a lot going on in this book–Poppy’s reluctance to go back to the children’s center, her encounter with a criminal, Grandma Beth’s illness, Gunner’s fate, Lizzie’s problems, etc. Adding revelations about Poppy’s parents, Trey’s regrets, and even Lizzie’s issues with her dad, in my opinion, muddy the waters a bit and make the narrative confusing at times. I understand why the author included these details, but I didn’t feel like they contributed a great deal to the story as a whole. Just my two cents.

My issues aside, I do think my students will enjoy A Million Ways Home, and I’m happy it’s on next year’s SCCBA list. Now, I get to figure out how to sum up this book in a minute-long book trailer to help me with promoting it! (Check my library’s YouTube channel later to see what I come up with.)

For more information on A Million Ways Home and other books by Dianna Dorisi Winget, visit the author’s website.