As another school year draws near, I’m once again scrambling to finish all of the current nominees for the South Carolina Children’s Book Award. As of today, I’ve managed to read 17 of the 20 titles, and I started number 18. Can I finish the rest before next Tuesday? We’ll see.

Anyhoo, I finished reading Anybody Shining by Frances O’Roark Dowell, one of this year’s SCCBA nominees, this afternoon. Historical fiction is not typically my go-to genre, but I found this book to be a quick, moving read that I think many of my students will enjoy.

Anybody Shining takes place in the mountains of western North Carolina in the 1920s, and the language used definitely reflects the setting. To be perfectly honest, I felt like I was reading something that one of my older relatives could have written. I still hear some of the same vocabulary encountered in this book, and I’m willing to bet that many readers, particularly those who’ve grown up in the South, will be able to relate. 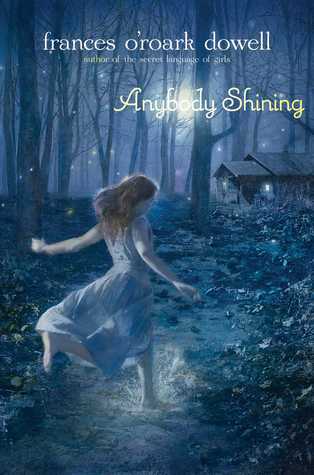 Arie Mae Sparks wants just one friend to call her own. She’s hopeful that her cousin Caroline, who lives all the way in Raleigh, will respond to her letters one of these days–and be the friend she’s always wanted–but it’s not looking good at the moment. Still…Arie Mae keeps on writing, telling her cousin about everything happening in Bone Gap, North Carolina.

Though Arie Mae despairs of ever finding one true friend, newcomers in her little town may provide some hope. These new folks–who’ve arrived all the way from Baltimore, Maryland–have come to the mountains to learn about the nearby settlement school. Almost immediately, Arie Mae sees the potential for friendship in Tom, a boy who has a special shine about him.

Even though Tom has a bad leg and can’t do everything the other kids can, he and Arie Mae form a fast friendship. He doesn’t care at all that Arie Mae is not as fancy as his sisters or that her family doesn’t have as much as his. He simply wants to hear her stories and go on adventures with her.

Arie Mae is all for seeking adventure, but she soon learns that Tom has more difficulties than just a bad leg. His mother warns Arie Mae that her new friend has a weak heart and shouldn’t exert himself too much. Arie Mae worries about this, but Tom is determined to do just what he wants. What’s a friend to do?

Through her continuing letters to her cousin, Arie Mae reflects on her friendship with Tom, her feelings about his condition, her family and their life on the mountain, and all sorts of other things. She thinks about what makes her world so odd to some and so special to others. Can people be true friends when they see the world so differently?

Learn more about the power of friendship, reaching out, and overcoming differences when you read Anybody Shining by Frances O’Roark Dowell.

Like some of the other SCCBA nominees this year, Anybody Shining is an excellent book for exploring the concept of voice. Arie Mae’s voice, in both her letters and the book’s narrative, shines through, and I think readers will delight in how she views the world around her. I’m hoping they’ll even follow her example and write their own friendly letters, allowing their own distinct voices to shine.

To learn more about Anybody Shining and other books by Frances O’Roark Dowell, visit the author’s website.

I’m hoping to have a book trailer up for this book soon. You can check my school YouTube channel for that in the near future.