Today, in an effort to escape election coverage, I dove into a bit of fiction. (I fully intend to get back to that as soon as I finish this post.) My latest read was the latest Diary of a Wimpy Kid book, Double Down. This is the eleventh offering in this wildly popular series, and I’m sure it won’t be the last. 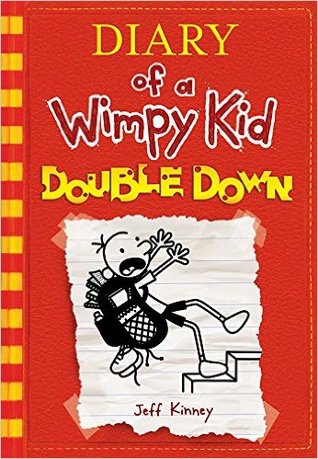 Greg Heffley begins his latest diary by wondering if the world really does revolve around him. Just in case he’s the star of some Truman Show-like experiment, he plays to the invisible cameras around him, makes plans to cash in on his fame later, and wonders if everyone around him is actually an actor…or a robot. And even if he’s not the focus of some lame TV show, Greg is sure that someone is out there watching him…and that’s kind of creepy when he really thinks about it.

Greg is also visiting his school’s book fair. Surely his mom won’t mind if he doesn’t buy actual books at the book fair, right? (Wrong.) When he’s forced to return all of the junk he purchased, he decides to buy the Spineticklers series by I.M. Spooky. His mom isn’t exactly thrilled with this either, but he figures that reading is reading.

As the days and weeks pass, Greg navigates life as best he can. He wonders about where his mom has stashed the coveted Halloween candy, he dodges the geese that are terrorizing his neighborhood, he deals with a sick pig who’s eaten too much candy corn, he reflects on the lies people tell, and he decides to join the school band in order to get invited to a party. (The band nerd in me is laughing like crazy at that last one.)

Even with all of that going on, Greg’s mom is on his case to broaden his horizons. She worries that playing video games all the time is making his brain go mushy, so she urges him to make new friends, study harder, do chores, and think about what he wants to do with his life. (She’s not too impressed with his idea to be a video game tester when he grows up.) Greg gets the bright idea to make a movie inspired by the Spineticklers books, but, as is so often the case with Greg, nothing works out according to plan.

Like the ten books before it, kids are sure to adore this Diary of a Wimpy Kid book. (I bought ten copies for my library, and they were gone within a day.) It’s funny, fast, and completely relatable, no matter what your current age.

As a school librarian, I found Greg’s take on the book fair to be hilarious…especially since mine starts this week. As a band nerd, I wanted to smack him upside the head for not realizing just how awesome band is. (Seriously, band kids are the best kids in any school.)

At any rate, I’m sure Double Down will be as popular as the other books and will have readers clamoring for more. I’m guessing we’ll see another DoaWK book around this time next year. News of future books will likely be announced first on the Wimpy Kid website or YouTube channel.

Speaking of YouTube, here’s a Double Down teaser I found on the Wimpy Kid channel. Check it out for an additional peek at this fun book.