While it’s not 100% necessary for you to read Ally Carter’s Heist Society series (Heist Society, Uncommon Criminals, and Perfect Scoundrels) before reading The Grift of the Magi, it is highly recommended. You may not fully appreciate the characters in this novella if you haven’t gotten to know them a bit through the series.

Last night, I got to dive back into the Heist Society series via a new holiday novella, The Grift of the Magi. Those familiar with the series already know that it centers around a group of savvy teen thieves (think a YA version of Ocean’s Eleven), and not much has changed in this latest story. 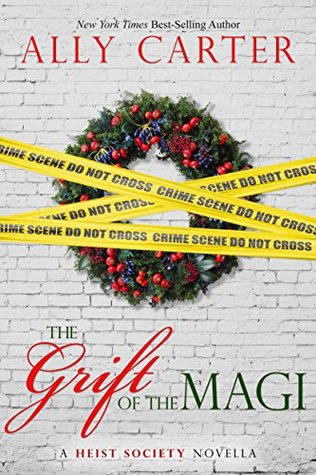 The Christmas season is growing closer, and someone has stolen a valuable donation from the Magi Miracle Network. The charity doesn’t want to go to Interpol about the theft, so they turn to Katarina Bishop, a girl known for stealing treasures and returning them to their rightful owners. This time, she’s charged with finding out what happened to the rare Faberge egg that was mysteriously stolen from the Magi Miracle Network, and she must do it before the charity’s upcoming auction.

Kat begins investigating both the charity and their infamous donation, and her search leads her to some familiar faces. Her boyfriend, Hale, for one. His beloved late grandmother founded the Magi Miracle Network, so he obviously has a stake in what’s going on. At first, Kat wonders if he could have had something to do with the theft, but it doesn’t take long for her to dismiss that notion. But she still wonders if someone close to her could be involved. It’s entirely possible…

As Christmas–and the charity’s auction–draws ever closer, the hunt for the Faberge egg leads Kat and company to the manor home of its donor. Something foul is afoot here, and Kat is determined to get to the bottom of this mystery. She’ll need to use every resource at her disposal to uncover the truth, but even that may not be enough.

Will Kat find the egg and return it to the Magi Miracle Network? What else will she uncover in the process? Whatever happens, this is sure to be a Christmas that Kat Bishop will never forget…

This fast-paced novella combines the magic and wonder of Christmas with a fair amount of trickery and thieving. Not a bad combo, in my opinion. Like the novels that preceded it, The Grift of the Magi delivers memorable characters, twists and turns, and an exciting, eventful story. I highly recommend it to middle grade audiences and up.

It was so much fun revisiting the characters I came to love during the Heist Society series. I truly hope we’ll see more of them in the future.

2 comments on “The Grift of the Magi”