So…I guess it’s fairly obvious that I’ve been catching up on the Lorien Legacies series. The series as a whole is now complete, but I had to read the last collection of novellas before moving on to the seventh and final full-length novel, United As One. I’m hoping to conclude this series sometime in January, but let’s turn our attention to Zero Hour for now.

Zero Hour, like the collections before it, is comprised of three novellas that provide a little more insight into the Loric Garde, their allies, and the Mogadorians that seek to take over Earth. In this particular collection, we see things from the perspectives of several characters we’ve met before–some friendly, others not so much. 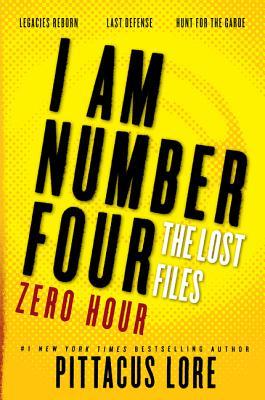 The first story in Zero Hour is Legacies Reborn, and readers are reintroduced to a character we met in The Fate of Ten. Dani Morales is a girl living in New York City. Her biggest concern is dealing with her horrible stepdad…until she realizes that aliens have invaded her city and seem determined to wipe out all traces of resistance. Separated from her mom, Dani tries to get across the city and reunite with the only person that really matters to her. She soon learns that this task won’t be easy, but she may get some help from some allies…and from some newfound powers of her own.

Next up, we have Last Defense. In this story, we learn a bit more about Malcolm Goode, otherwise known as Sam’s dad. Malcolm is still dealing with being held captive by the Mogadorians for years, reuniting with his son, and doing whatever he can to help in fighting this alien invasion. Malcolm has information that very few people on Earth are privy to, and that inside look at how the Mogadorians operate makes him valuable to those looking to combat this threat, particularly the President and his closest advisers. But how does Malcolm reconcile assisting the President with his need to keep his son safe?

Finally, there’s Hunt for the Garde. This novella is actually three stories in one, all from the perspectives of Mogadorians (or bad guys).

So, that’s Zero Hour. It definitely whets my appetite for United As One, and it hints that things are going to get much worse before they get better. I guess we’ll just have to see. At the very least, it should be interesting to see how the characters and storylines from Zero Hour play into the final chapter of this exciting series.

For much more information on the Lorien Legacies series, go to the I Am Number Four Fans website. Enjoy, and I’ll be back for my 2016 wrap-up in a couple of days.