I think I established a couple of weeks ago that I adore Squirrel Girl. Well, that’s even more true now that I’ve read The Unbeatable Squirrel Girl: Squirrel Meets World. This novel, written by Shannon and Dean Hale, gives readers a look into how Doreen Green became one of the funniest, most optimistic, and most lovable superheroes to hit the Marvel scene. 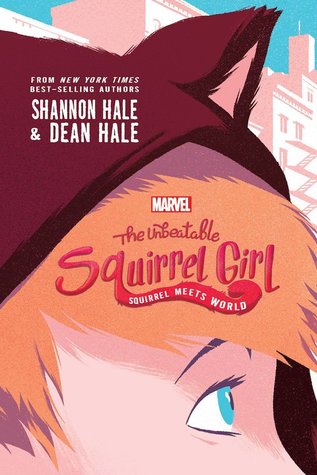 Fourteen-year-old Doreen Green has a tail, she’s fast and super-strong, she understands Chitterspeak (squirrel language), and she loves nuts. She’s basically a human with lots of squirrely qualities. She and her family have just moved to New Jersey from California, and she’s looking to make some new friends–both human and squirrel.

It’s not easy, though, when you’re new in town. At first, the neighborhood squirrels don’t know quite what to make of her. They’re not used to people like Doreen. (To be fair, there are no other people like Doreen.) Eventually, Doreen forms a friendship with Tippy-Toe, a feisty little tree squirrel.

Making human friends proves to be even more complicated than connecting with the squirrel community. The popular kids at school don’t want to have anything to do with Doreen. They even make fun of her backside. (Doreen knows they’d probably love her big, beautiful squirrel tail, but she has to hide it at school. You’d have a large, curvy backside too if you had to stuff a huge, furry tail in your jeans all the time.)

Doreen does find one (rather reluctant) friend in Ana Sofia, a deaf, Latina girl who’s been investigating the increasing crime levels around town. When Doreen puts together the alarming number of squirrel traps in town, Ana Sofia’s investigations, and some weird buzzing things that are making the neighborhood dogs crazy, there’s only one logical conclusion. Her new town has a supervillain at work!

Well, when there’s a supervillain causing chaos, a superhero needs to save the day. Doreen knows what she must do. She finally becomes who she was always meant to be–Squirrel Girl! She helps humans and squirrels alike, and she works to figure out who is behind the pandemonium in town. She seeks help from a couple of Avengers, but, in the end, it’s up to Squirrel Girl, her new best friend, Ana Sofia, and an army of extremely helpful, talented squirrels.

Does Squirrel Girl have what it takes to be a real superhero? Can she and her new friends stop a criminal mastermind before everything goes nuts? Find out when you read The Unbeatable Squirrel Girl: Squirrel Meets World!

In a world that is increasingly dark and depressing, Squirrel Girl is a glimmer of light and happiness. When I was reading this book, it immediately put me in a better mood. Doreen’s voice is totally charming, and I dare anyone who reads this book not to like it…or want more.

This novel is told in third-person, but the reader gets a better glimpse of the awesomeness of Squirrel Girl through first-person footnotes. These notes add to the hilarity of the book and are sure to make readers chuckle.

Squirrel Meets World will be released to the masses next Tuesday, February 7th, and I’m not exaggerating when I say that every school and public library should add it to their collections. It’s great for all ages, and I think it will encourage a whole new brood of readers to pick up the Squirrel Girl comic books. I’m also really hoping that we’ll see more Squirrel Girl novels in the future. I’ll definitely be on the lookout.

Finally, many thanks to NetGalley for letting me read this book a little early. I love it!