When I first became an elementary school librarian, I figured out pretty quickly that Mary Downing Hahn was the go-to author for scary stories. I guess that’s why the book I finished last night surprised me a bit. While parts of Where I Belong are horrific, it’s not the scary book I typically expect from this author. Oddly enough, some of my students who have no problem with ghosts, gore, or stuff like that find a few of the situations in this book a little too disturbing. It kind of makes me evaluate what really frightens people. 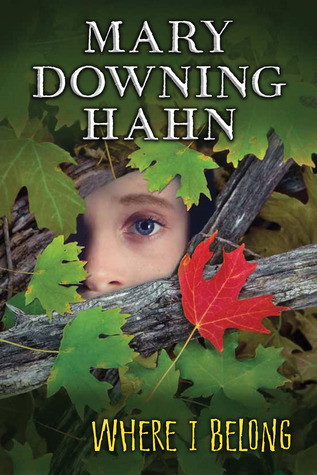 Brendan Doyle expects people to be mean to him. It’s pretty much all he’s known. Abandoned by his mother when he was little, Brendan has been shuffled from foster home to foster home. His current foster mom, Mrs. Clancy, doesn’t know what to do with him, and his teachers seem to feel the same way. Brendan doesn’t care much about school, so he doesn’t see why he should even try to pass the sixth grade. He doesn’t want to go to middle school anyway.

As for relating to other kids, he doesn’t. Brendan hasn’t a friend in the world, and he spends much of his time alone. He’s bullied by other kids and by a trio of ruffians who delight in terrorizing everyone they meet.

Brendan finds some measure of peace in his books, art, and visiting the forest nearby (which he’s sure is enchanted). One day, after building a private treehouse in the woods, Brendan meets an old man. He’s convinced this guy is the Green Man, the protector of the forest. Brendan looks to the Green Man as an ideal, someone to aspire to. Maybe he can escape real life and live in the forest someday, too.

Back in the real world, sixth grade is over, and Brendan is now attending summer school. He’s not enthused, even with a decent teacher and a possible friend, a girl named Shea. Shea follows him around–even when he tells her to get lost–and just will not allow him to ignore her. Almost against his will, the two become friends, and they find common ground in their love of fantasy, the forest, and family lives that aren’t so great. Shea even convinces Brendan to try a little harder at school so that she’ll have a friend in middle school. Maybe things are beginning to up for Brendan.

Unfortunately, things don’t stay so great for long. Once again, Brendan becomes the victim of the three hooligans who have given him a hard time before. This time, though, they take things a step or two further. Brendan wonders why the Green Man, guardian of the forest, doesn’t come to help him. He feels lost, broken, and alone, and he doesn’t know what to do.

But Brendan is not alone. He has Shea. He has the Green Man (who has a story all his own). He has his summer school teacher. He even has Mrs. Clancy. With their help, maybe he can find some hope. He may even find the courage to stand up to his tormentors and see justice done.

Soon, Brendan will discover that hope and friendship can overcome even the darkest times, and he’ll finally find out where he belongs.

I think I’ve made this book sound pretty good (not to pat myself on the back or anything). It is good, but I didn’t like as much as I wanted to–as much as I usually like Mary Downing Hahn books. I did cry at the end, so I was invested emotionally. I guess that’s something, but I much prefer Hahn’s spooky stories. I’m betting my students will feel the same.

Some of the situations Brendan finds himself in are, in my view, a bit too gritty for most elementary school kids. I’m thinking specifically of his run-ins with the three ruffians mentioned in my synopsis above. I think the book as a whole is fine for mature 4th/5th graders or middle school students, but I wouldn’t recommend it to a lot of my younger or less mature students. I just don’t think they’re developmentally ready for some of what Brendan encounters. (Feel free to disagree in the comments.)

For more information on Where I Belong and other books by Mary Downing Hahn, visit the author’s website.