Last night, I finished yet another of next year’s South Carolina Children’s Book Award nominees. This book, Ruby on the Outside by Nora Raleigh Baskin, was a quick but powerful read, and it handled a difficult subject with a great deal of sensitivity. 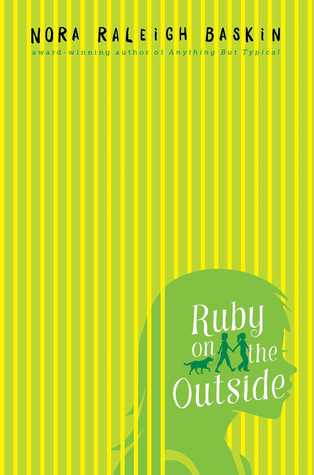 What is life like for kids whose parents are in prison? Well, Ruby Danes can tell you that it’s not easy. She doesn’t want to tell anyone the truth of her mom’s situation and risk becoming an outcast. That makes forming real friendships very difficult. But Ruby is getting ready to begin middle school, and what she wants more than almost anything is her very own best friend to face the future with her.

As it turns out, Ruby may just get what she wants. A new girl, Margalit, has moved in nearby, and she and Ruby hit it off almost instantly. They spend most of their summer days together, and Ruby thinks she’s finally found the best friend she’s been looking for. Can she trust Margalit with her secret, though? Would Margalit judge Ruby for her mother’s crimes?

When Ruby begins to piece together what led to her mother’s incarceration, she doubts that Margalit could ever want to be best friends. It seems that Margalit’s family may be closely tied to the crime that landed Ruby’s mom in prison. This devastates Ruby, and it forces her to finally deal with some deep feelings that she has toward her mother.

Will Ruby be able to forgive her mother for the decisions she made in the past? Will she be able to reveal her secret to Margalit and find the friend she needs? Find out when you read Ruby on the Outside by Nora Raleigh Baskin.

Ruby on the Outside is an important book to add to upper elementary and middle school library collections. It addresses a situation that is often overlooked, but, like it or not, that situation is all-too-real for many children, even those in our own spheres of influence.

This book is not preachy, overly optimistic, or terribly gritty, but it does offer a simple, realistic, and touching look at the life of one girl dealing with her mom’s imprisonment. That one thing colors nearly everything in Ruby’s life, and it’s interesting to see how she looks at things that most of us may take for granted. Something as simple as “Have your mom sign this permission form,” for example.

Ruby on the Outside is a powerful little book with many big lessons. I hope many students and teachers in my school–and many others–will give this book a chance and use it to foster discussions about empathy, forgiveness, and friendship.

To learn more about Ruby on the Outside and other works by Nora Raleigh Baskin, visit the author’s website. You can also connect with her on Twitter, Instagram, and Goodreads. You can also hear more about this book from the author herself in the video below. Enjoy!