I finished another of next year’s South Carolina Children’s Book Award nominees a couple of days ago, but I decided to wait a little while to write about it. Why, you ask? Well…I didn’t want to. I was on spring break, and I wanted to do as little as possible during the last few hours until I went back to work. I succeeded, and it was wonderful. Now, though, it’s back to the grind for me, so here we go.

On Sunday, after all of my family Easter festivities were over, I finished reading Fuzzy Mud by Louis Sachar. This was a quick, interesting read that could lead upper elementary and middle grade readers to think more about the environmental impact of the things around them. 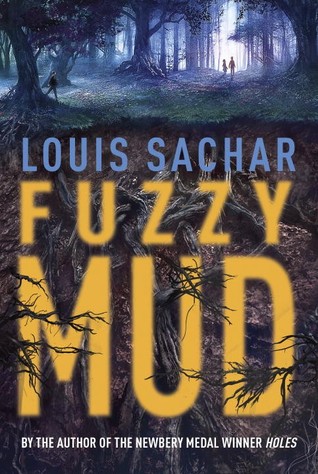 If only they’d walked home on their normal route…

Tamaya Dhilwaddi and Marshall Walsh always walk to and from school together, and they always take the long way around the woods. One day, however, Marshall changes things up. In an effort to avoid Chad Hilligas, a bully who’s been making his life miserable, Marshall decides to walk home by taking shortcut through the woods. Tamaya is not exactly happy about this plan, but her mom won’t allow her to walk home alone, so she follows Marshall.

It doesn’t take long for Tamaya to realize that Marshall doesn’t know where he’s going. What’s more, Chad has caught up with them and is bent on making Marshall his own personal punching bag. In an effort to get Chad away from Marshall, Tamaya scoops up a handful of strange, fuzzy mud and flings it into Chad’s face. She and Marshall then run away, and, a little worse for wear, they eventually make their way home.

After her adventure in the woods, Tamaya notices that her hand is tingly and has what looks like a rash on it. She tries to take care of it herself, but it keeps getting worse. Could it possibly be caused by the fuzzy mud she hurled at Chad? If so, does his face look as bad as her hand does?

When Tamaya discovers that Chad is missing after their encounter in the woods, she becomes determined to find him and get him the help he probably needs. Marshall isn’t as eager to go looking for Chad, but he eventually follows Tamaya into the woods…where they find even more of the fuzzy mud and Chad, who is not doing well at all.

Something weird is going on in these woods, and Tamaya, Marshall, and Chad have–literally–stepped into a big mess. What they uncover could have huge implications for their school, their town, and the entire world.

What exactly is this fuzzy mud? Why is it causing such an odd rash? Is there a cure? What (or who) created the fuzzy mud, and can anything stop it from spreading? You’ll have to figure that out for yourself…

Like I indicated previously, I think this book could start some discussions on the environmental impact of industry and innovation. Most kids probably won’t deal with something as potentially disastrous as what occurs in Fuzzy Mud, but they do need to be aware of how much their lives could be impacted by governments, industries, and decisions made by others. Don’t believe me? Take a good look at the water situation in Flint, Michigan.

Fuzzy Mud also handles a couple of issues beyond the environment and unintended consequences. It addresses bullying and what may be causing a kid to act out. It addresses courage in the face of scary situations. At one point, Tamaya thinks to herself, “If not her, who?” No one else was really even looking for Chad when he was missing, so she did. It wasn’t easy, and she was scared; nevertheless, she persisted. An important lesson, wouldn’t you say?

I encourage you to share this book with readers in upper elementary and middle grades. It’s a fast, fun, intriguing read that’s sure to leave you thinking long after you’ve read it.

For more information on Fuzzy Mud and other books by Louis Sachar, visit this award-winning author’s website.