Caution: Read The Last Kids on Earth before proceeding with this post. I’d hate to ruin things for you…but I will.

So…thanks to students returning library books at the end of the school year, I was finally able to get my hands on The Last Kids on Earth and the Zombie Parade, book two in Max Brallier’s Last Kids on Earth series. If you read my post on book one, you know I’m a big fan of the first book, and that only solidified when I read book two. The sass continues in this latest volume as, once again, our heroes try to save themselves and the world from the monster apocalypse. (I know the premise doesn’t sound all that fun, but it totally is. Trust me.) 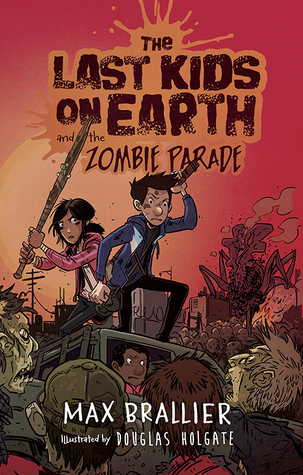 When last we left Jack and company, they had just defeated Blarg, an evil monster bent on killing Jack and everyone else in his path. Now, Jack, Quint, Dirk, and June are staying busy doing all sorts of heroic questing. At present, that means gathering supplies, building a bestiary (a record of all the monsters around) and evading the Wormungulous (giant worm monster) that resides at the local mall. You know…business as usual.

With the help of a mysterious man-monster named Thrull, Jack’s crew does manage to wound and evade the Wormungulous. But who is Thrull, and where did he come from? He appears to be a friendly sort, and he leads our merry band to Joe’s Pizza, which has essentially become home to a bunch of not-so-bad monsters. Nothing like the big guys who’ve been trying to kill everyone and everything. Maybe someone here can help them figure out what brought the monster apocalypse to Earth in the first place…and how to stop it from getting worse.

Speaking of worse, a strange shrieking is having an odd effect on the zombie population in town. Whenever the Shrieking sounds, all the zombies form kind of a zombie parade, they move toward the horrible sound, and they’re never seen again. (One would think this would be a good thing, but Jack knows it’s super-creepy and probably indicates that something really bad is going on. He’s right.) What’s causing the Shrieking, and what’s happening to the zombies when they reach their destination?

Jack and company are determined to answer these questions, but can they do that without putting themselves in even more danger? (Answer: No.) You see, they’ve been duped by someone close to them, someone who’s working for an evil worse than anything they’ve ever encountered, a force so big, so powerful that it could bring forth the total annihilation of Earth. (And you thought monsters and zombies were bad.)

Can Jack, Quint, June, and Dirk stop what’s is happening? Can they rescue all those poor, pitiful zombies from whatever is calling them to their doom? Can they figure out who to trust before it’s too late?

Like book one, The Last Kids on Earth and the Zombie Parade delivers a story full of action, adventure, mystery, courage, and friendship, all with a liberal dose of humor. Max Brallier’s text and Douglas Holgate’s illustrations flow seamlessly and provide the reader with a quick, amusing, engaging story that makes them eager to turn every page. Anyone who reads this book (and its predecessor) will be thirsty for more tales from this frighteningly fun world.

The next book in this series, The Last Kids on Earth and the Nightmare King, will be out on September 26th. Based on the previous books and the synopsis on Goodreads, book three will be just as thrilling as the rest. I can hardly wait!