I’ve loved Wonder Woman since I first saw Lynda Carter spin around when I was a kid. My parents have pictures of my three-year-old self posing in my Wonder Woman Underoos. I have Wonder Woman action figures, comic books, t-shirts, and even Converse shoes. There’s a Wonder Woman display in my school library. I buy my nieces Wonder Woman stuff for birthdays, holidays, or whenever the mood strikes me. So of course I had to read Wonder Woman at Super Hero High, the first book in the DC Super Hero Girls series by Lisa Yee. I’m just embarrassed it took me so long to get around to it. (It was released nearly a year ago.) 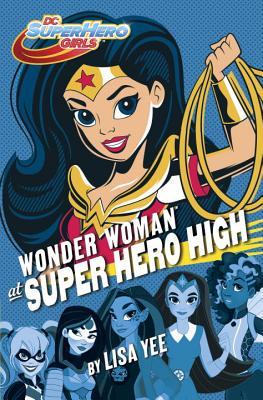 Super Hero High is the place to be for teen super heroes…and Wonder Woman wants in. After spending her entire life on Paradise Island (also known as Themyscira) with her mother, Hippolyta, Queen of the Amazons, Wonder Woman finally convinces her mom that she needs to be trained as a proper super hero. Off to Super Hero High she goes!

With a positive outlook and a desire to make a difference, Wonder Woman enters the hallowed halls of Super Hero High. Even though some things perplex her (like slang and sarcasm), she’s determined to be a successful student.

Almost immediately, she makes a few friends–like Bumblebee, Katana, Hawkgirl, and Harley Quinn (who’s also her roommate)–but it seems she’s also made an enemy or two. Someone keeps leaving notes for her indicating that she’s not wanted at Super Hero High. Who could dislike her so much?

With Harley Quinn videoing every move she makes and someone leaving her mean notes, Wonder Woman is feeling the pressure to be the best, especially when she factors in her desire to be on the school’s Super Triathlon team. Can she make a difference when so much is weighing on her? Can she possibly figure out who wants her gone?

Join Wonder Woman and many other familiar faces to find out if they’ve got what it takes to be true heroes!

I’ve glossed over a lot here, and that’s sort of intentional. It’s a fast, entertaining read, and I don’t want to spoil it for anyone. A few things I will say, though:

Wonder Woman at Super Hero High is a great fit for elementary and middle school libraries. Considering that many kids (and adults) read DC comics and collect action figures, there’s a ready-made audience just waiting for this book and those like it.

If you’d like more information on Wonder Woman at Super Hero High and the series as a whole, visit author Lisa Yee’s website.