Spoiler alert! If you haven’t read Black Widow: Forever Red, turn back now. I promise this post will spoil parts of this first book (and possibly the second) for you. This will be your only warning.

As you’ve no doubt gathered, I recently finished reading the sequel to Black Widow: Forever Red by Margaret Stohl. The second book, Red Vengeance, will be released to the masses next Tuesday, October 11th, though I have seen it in stores already. I got to read the book a little early thanks to NetGalley, and I thought it was wonderful. It was action-packed, convoluted at times, horrifying, and entertaining. Like the first book, I loved seeing some of my favorite Marvel heroes–aside from Black Widow–in a different light.

If you enjoyed the first book, Black Widow comic books, or her appearance in the Marvel Cinematic Universe, I think you’ll definitely appreciate getting a closer look at this enigmatic character in Red Vengeance. 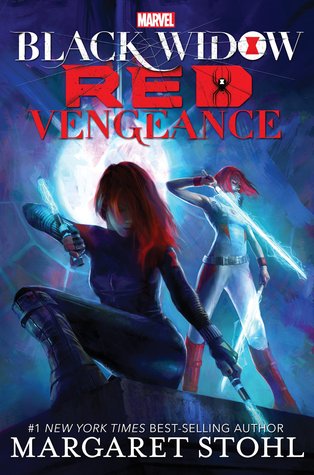 Red Vengeance picks up several months after the events of Forever Red, and it once again focuses primarily on Natasha Romanoff (aka Black Widow) and Ava Orlova (Red Widow). Both are still reeling after the death of Alexei, Natasha’s brother and Ava’s first love. Ava is training with Natasha, trying to learn to use and control her new powers. Natasha is attempting to come to grips with everything that has happened and find some way to regain her confidence in her instincts. Soon enough, both Widows will have to put all of their training and instincts to use to face threats both old and new.

While following a tip about Red Room activity in Brazil, Natasha and Ava come into contact with a girl in a green dress. After that initial contact–a stellar brush pass–everything begins to go haywire. Someone manages to hack and erase all of Natasha’s secure files. Who could possibly have the ability to do such a thing, and why would they target the Black Widow?

Natasha and Ava attempt to escape to safety only to have Natasha’s Widow’s Cuff–and her motorcycle–blow up. They seek refuge in one of Tony Stark’s many homes, and they call in SHIELD to help figure out what’s going on. They confer with Phil Coulson, Maria Hill, Tony Stark (Iron Man), and Carol Danvers (Captain Marvel) to see who could possibly have pulled off such a genius hack. Nobody really knows, but it’s clear that something serious is afoot. Red Room serious.

Natasha knows that Ivan Somodorov is dead, but it seems that someone else is trying to continue his evil work. Someone who has it in for Natasha and her rather explosive apprentice, Ava. The two Widows follow the clues into the Amazon where they discover something truly appalling. Not only is the Red Room’s work continuing, but whoever is running the show has five nuclear missiles at their disposal as well as a terrifying new drug called Faith.

Natasha and Ava do what they can to minimize damage, but even the Widows can’t totally stop the catastrophe that’s coming. Someone–a person with a connection to Natasha’s past–has their own agenda and will do whatever it takes to see it come to fruition. Does that mean deploying nuclear missiles? Does it involve distributing a gruesome, mind-altering drug? (The answer to both questions is a resounding “YES.”) How can Natasha, Ava, and their assorted friends possibly eliminate such a threat? And what if this is only the beginning of what’s in store for the Widows?

I probably should have stopped writing a few paragraphs ago. I feel like I’ve given way too much away. Let’s just be grateful I called a halt when I did. I could seriously go on and on about this book and its predecessor. Black Widow is one of my favorite Marvel heroes, and I adore both of these books.

I also really appreciated the appearance of Captain Marvel in this story. She’s another favorite, and I loved that both she and Black Widow were part of a “Women of Power” poker night. Oh, to be a fly on the wall. From what I understand, there’s a possible Captain Marvel novel in the works, written by Shannon and Dean Hale, but I don’t have any details on a possible release date.

Speaking of future Marvel books, given the way that Red Vengeance ended, we can be sure that at least one more Black Widow novel is on the horizon. Unfortunately, there’s no word yet on when we can expect the next story. Bummer.

For more information on Red Vengeance and other books by Margaret Stohl, visit the author’s website and Twitter page. These are probably the first places you’ll find an announcement on book three. Given that book two hasn’t been officially released yet, though, you could be in for a long wait.

Be sure to pick up Black Widow: Red Vengeance on October 11th!

After the success of nearly every film in the Marvel Cinematic Universe, many people–myself included–have been clamoring for a Black Widow feature film. Sure, she’s one of the Avengers, and she played a vital role in Captain America: Winter Soldier, but where’s her movie?! Where’s the story of Natasha Romanoff?

Well, thanks to the brilliant Margaret Stohl (co-author of the fantastic Beautiful Creatures series), I think we have a pretty amazing basis for a Black Widow film. Black Widow: Forever Red takes a look at what–or who–made Natasha into the kick-butt assassin we know and love. (This was briefly alluded to in Age of Ultron, but this book gives a much more in-depth, gritty peek into Natasha’s disturbing past.) Now, though, there are two more people Natasha has to worry about, a girl who shares remarkable similarities to the famed Black Widow and a boy who is somehow connected to both of them.

Natasha Romanoff didn’t have a typical childhood. Very few other girls know what it was like to be trained by the evil Ivan Somodorov in his infamous Red Room in Moscow. This horrible man taught Natasha how to be lethal, how to lie with conviction, and how to follow orders blindly.

Natasha is not that girl anymore. She’s moved on from her life as one of Ivan’s girls, and she’s done all she can to put things behind her. Unfortunately for Natasha, the past has a way of catching up to her…

Ava Orlova once encountered the woman the world now knows as the Black Widow. After Ava was rescued from the clutches of Ivan Somodorov, Natasha Romanoff promised to look out for Ava. That was the last time Ava saw her. After escaping SHIELD custody, Ava is now on her own, virtually homeless on the streets of Brooklyn. She fences at the Y, sketches the boy who haunts her dreams, and takes care of Sasha Cat, a stray like herself. Like Natasha, though, the past that has always haunted Ava is about to become a very real part of her present…

Alex Manor is a normal kid. He goes to school, he hangs out with friends, and he argues with his mom. Typical stuff, right? So what if he often feels like he’s being watched. So what if his instincts completely take over when he fences or fights. So what if he doesn’t seem to fit in his own life. Well, Alex will soon realize that “normal” is not a word that should ever be used to describe him. Especially not after he encounters Ava, a girl he’s immediately drawn to, and Natasha Romanoff, Black Widow herself.

Natasha, Ava, and Alex come together at a fencing tournament…and nothing is ever the same. Almost immediately, they must escape an enemy threat, unravel a convoluted mystery, and figure out just what they mean to each other. None of them are truly prepared for the answers they find…or the sacrifices they’ll have to make to get out of this alive.

I don’t want to give away too much more about this book, so I’m going to wrap this up. I think it’s enough to say that this Black Widow fan is ecstatic about this book–which will be released next Tuesday, October 13th–and I hope to see more Black Widow (or Red Widow) novels in the future. (There may have been a spoiler in that last sentence. I guess you’ll just have to read the book to find out.)

Many thanks to NetGalley for giving me the opportunity to read this book a little early. I loved everything about it, particularly the awesome female characters (who displayed many different kinds of strength) and appearances from Agent Coulson and Tony Stark. Black Widow: Forever Red whetted my appetite for all things Marvel, so I see a movie and comic book marathon in my immediate future.

If you are a Marvel nerd, I strongly urge you to read Black Widow: Forever Red (which I think is fine for libraries that serve middle grade and teen readers). You will not be disappointed.

If you’d like to learn a bit more about this wonderful book, check out the video below for an interview with author Margaret Stohl.