Greetings! This evening, I bring you yet another of the 15-16 South Carolina Children’s Book Award nominees, Gingersnap by Patricia Reilly Giff. This short yet powerful novel combines historical fiction with a bit of the supernatural, and readers end up with a moving tale of a young girl looking for a sense of family. 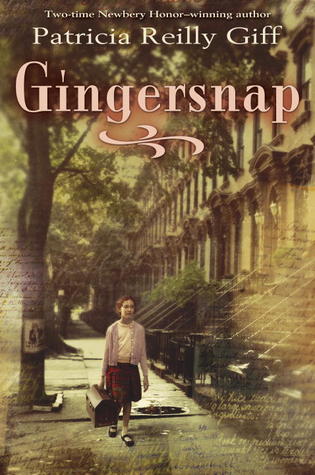 The year is 1944, and war continues to hold the world in its grips. Jayna knows it’s just a matter of days before her big brother Rob, the only family she has, will be deployed on a ship headed for the fighting in the Pacific. Jayna tries to put on a brave face, but she’s not happy about being separated from her brother once again, and she doesn’t want to live with Celine, their grumpy landlady, while Rob is away.

After Rob leaves for duty, Jayna is comforted by her turtle Theresa, cooking soup, and by an odd presence that seems vaguely familiar. Is this a ghost? If so, who is it, and what does it want with Jayna?

When Jayna receives the devastating news that her brother is missing in action, this “ghost” leads the girl back to their house and to an old box in a closet. There Jayna finds an old blue cookbook and the address of a Brooklyn bakery called Gingersnap (which happens to be Jayna’s nickname).

Jayna, though scared and unsure, sees the bakery’s name as a sign, and she packs up her turtle, the blue cookbook, and most of her belongings and sets off for an uncertain future and a grandmother she’s never known. Jayna is accompanied by the voice of her ghostly companion, and she eventually arrives in Brooklyn. What she finds there, however, may not be exactly what she expected.

Jayna is very confused about her current circumstances and what will happen to her should her brother never return. She likes being in Brooklyn and the friends she’s made, but what if Rob never comes back to her? What if he’s gone forever? Jayna seeks out her ghostly friend to give her some measure of help, but she doesn’t know if that will be enough to keep her brother safe or to preserve the little family she’s made for herself in Brooklyn.

What will become of young Jayna in this time of turmoil? Read Gingersnap by Patricia Reilly Giff to find out!

Many of my students may pick up Gingersnap for the length (only 160 pages), but I hope they stick around for this heart-warming story. In just a few pages, Patricia Reilly Giff gives readers a fairly realistic look at what life may have been like for a young girl during World War II. We see how a family can be torn apart by war, how a girl will do whatever she must to survive and thrive, and how scarcity and rationing can have a huge effect on not just a family’s meals but also keeping a business going.

Peppered throughout Gingersnap, readers see Jayna’s soup recipes. These recipes reflect exactly what Jayna is going through, and the instructions are at once charming, funny, and reminiscent of many recipes created by kids–or my own mother, a woman who makes soup by tossing everything but the kitchen sink into a pot and cooking until it tastes right. (Whatever she does, it works. My mom’s soup is the best.)

Even though the ending of this book is a tad predictable, I still appreciated Jayna’s journey. She learned quite a bit about herself, her family’s past, the war going on around her, and what it really feels like to be part of a family and the community around her. And even though everyone around her had their own reasons to be cynical and angered by the circumstances of war, they were all kind and caring, and they showed Jayna just what it meant to be there for one another in difficult times.

As for the “supernatural” bits of Gingersnap, neither I nor Jayna are sure if a ghost was at work. It’s possible. This part of the book is definitely open to interpretation, and the discussions about this presence could be quite interesting.

I think Gingersnap is a great read for those in third grade on up. (Yes, even middle schoolers and teens will find something to enjoy.) This book could lead to further research on World War II and the fighting in the Pacific, and it would be a good novel study presenting a different view of the war. (As my fellow educators likely know, most novels with a WWII-focus tend to center on the fighting in Europe and/or the Holocaust.)