It’s my first Monday of summer break, and I’m continuing to make my way through the nominees for the 2017-18 South Carolina Children’s Book Award. (My job never really stops, does it?) My latest read is one that I devoured in about a day. It’s Full Cicada Moon by Marilyn Hilton, and it’s both a novel in verse and a work of historical fiction. Neither of those categories are my typical favorites, but I absolutely loved this book, and I look forward to sharing it with my students in the coming year. 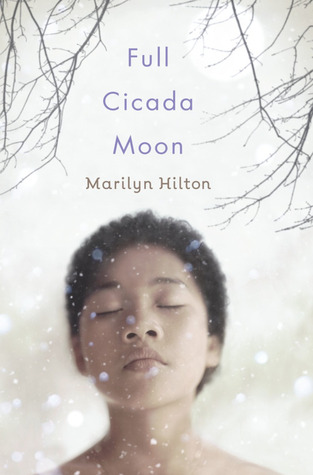 This moving book takes a look at one girl’s life over the course of one year, beginning on January 1, 1969, and a big move from California to Vermont. Relocating from one coast to another is a lot to handle; when you’re a half-black, half-Japanese girl moving to a mostly white area, it’s even more difficult.

Our protagonist, Mimi, reflects on the move, the attitudes of people around her, her own dreams, and what she’s willing to do to achieve them in this wonderful novel that will hopefully inspire readers to stand up for themselves and do whatever they can to be the change they want to see in the world.

Mimi dreams of becoming an astronaut one day. She loves studying science…even when people tell her that’s nothing something girls should be interested in. Mimi doesn’t care what other people think. She’s determined to go to space someday, just like the brave astronauts on the Apollo 11 mission.

The people at her school in Vermont don’t know what to make of Mimi. For one thing, they’ve never really encountered someone with her cultural background. For another, they don’t know what to think of a girl who likes science and wants to take shop class instead of home ec. Mimi doesn’t see what the big deal is on either count. What does it matter what color her skin is? Why should that make people dislike her before they even know her? And why do girls have to learn to sew and cook? Why can’t they learn to use tools and build things? None of this makes sense to Mimi–and it sometimes gives her a sick feeling in her stomach–but she’s not going to let any of it stop her.

Eventually, Mimi makes a couple of close friends who like her just the way she is, friends who support her efforts to change things. They may not always understand Mimi or their own privilege, but they’re willing to do what they can to help their friend. Those friendships, while helping Mimi to feel like she fits in her new town, also help give her courage to stand up for her rights.

Things may not change overnight, but Mimi is determined to do what’s right. In the process, she may just change the attitudes of those around her. Maybe, once people–adults and kids–get to know Mimi and her family, they’ll realize that they’re not so different after all.

Many readers will be able to see themselves in the character of Mimi, regardless of their racial backgrounds, but biracial readers may especially relate to Mimi. Mimi celebrates both her Japanese and African-American cultural traditions, all while trying to fit into a mostly white town. Mimi handles everything thrown at her with grace, tenacity, and courage, even when it would be much easier to respond in anger. In my opinion, she inspires others–both the characters in this book and those who read it–to do the same.

Full Cicada Moon is a powerful read that celebrates the things that make us different as well as those that bring us together. I cannot recommend it highly enough for any libraries that serve upper elementary, middle grade, and even teen readers. For more information on this wonderful book, visit author Marilyn Hilton’s website. You may also want to follow the author on Twitter.