Read Wonder by R.J. Palacio before proceeding with this post. (Actually, read Wonder anyway. This is a book that everyone–regardless of age–needs to read.)

Last night, I finally made time to read Shingaling, the third “bonus” story that goes along with Wonder. At first glance, I wasn’t totally sure which character I’d be reading about. The title, which refers to a dance I’d never heard of before, doesn’t immediately give that away.

It didn’t take long for me to realize that this story is told from Charlotte’s perspective. You might recall that she served as one of Auggie’s “welcome buddies” during his first days at Beecher Prep. That’s not the only thing that was going on in Charlotte’s life, though. While Auggie was dealing with his first year at school, Charlotte was wading through some issues of her own… 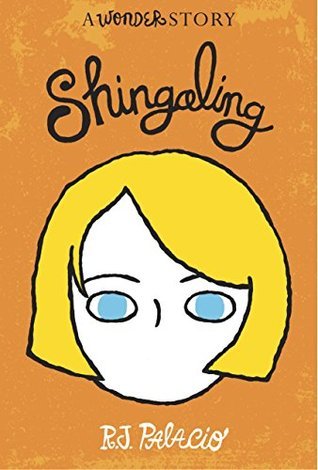 Charlotte has always been a nice kid. She gets good grades, she’s polite to adults, she helps the new kid at school, and she tries to stay out of all the drama that comes with middle school. Does she sometimes try a little too hard to be liked? Sure, but it’s just because she wants to belong.

Charlotte’s best friend, Ellie, has been accepted into the most popular group in school, and Charlotte feels like she’s been left behind. It doesn’t help that Ellie’s new friends are sometimes mean to Charlotte and other students in school. Charlotte knows she shouldn’t care what this group thinks of her, but she can’t help it. She really wants them to like her.

When Charlotte is given the chance to dance in a very special performance–based on the shingaling–she also gets the opportunity to get to know Ximena, one of the popular girls, and Summer, one of Auggie Pullman’s closest friends. All three girls are spending hours each week practicing their dance, and they gradually learn that they have more in common than they thought. They become friends and talk about their interests, their fears, and their perceptions of the people around them.

It’s during these conversations that Charlotte realizes hat the kids at school think of her as a goody-two-shoes who’s only nice when teachers are looking. Charlotte tries to be nice to everyone around her, but maybe that’s not the same thing as being kind.

Join Charlotte as she learns what kindness, friendship, and even empathy really mean when you read Shingaling: A Wonder Story by R.J. Palacio.

The little synopsis above is one of the most difficult I’ve ever written…and I honestly can’t pinpoint the reason for that. Even though this story was less than 70 pages long, it covered a lot, and I know I’ve left out a bunch of stuff and glossed over even more. I apologize for that.

If you’ve read Wonder and The Julian Chapter, you know that the boys of Beecher Prep had their own brand of drama going on during Auggie’s first year of school. Well, in Shingaling, we get to see the girls’ side of things. We see what they think of the “boy war” and how they are dealing with the cliquey girl drama that is so common in middle schools the world over. (This story definitely made me reflect on my own horrible experiences in middle school. I imagine other readers will have similar experiences.)

Auggie is barely a blip in Shingaling, and that, in my opinion, helps fans of the original book to realize that there was more going on at this school than just Auggie’s story (even though it’s an extremely important one to tell). Sure, Auggie’s journey had an impact on the character of Charlotte, but it wasn’t the sole focus of her year. She had her own issues to sort through, and, while Auggie had a small part in how that played out, Charlotte had to forge her own path and learn several lessons in her own way (as we all do).

As far as I know, Shingaling is the last of the Wonder stories. It’s actually now part of a print collection known as Auggie & Me, which includes The Julian Chapter, Pluto, and, of course, Shingaling. If you’re a fan of Wonder, I highly recommend reading each of these extra stories. I think they definitely add some depth to what we saw in Wonder. You might also want to check out 365 Days of Wonder: Mr. Browne’s Book of Precepts. I haven’t read that one yet, but I understand that it’s a book of sayings–or precepts–supposedly compiled by Auggie’s teacher, Mr. Browne.

Christine Fletcher’s novel, Ten Cents a Dance, explores the world of taxi dancing in Chicago around the time of World War II.  The book follows Ruby Jacinski, a poor sixteen-year-old girl, who is sick and tired of working in the slaughterhouse for next to nothing.  Her mother has rheumatoid arthritis and cannot work, so Ruby has to quit school to earn money for the family.  She eventually comes across what she believes is a solution to her financial woes:  taxi dancing at the Starlight Dance Academy.  Men would pay her ten cents a dance.  The Starlight would get half, and she’d take a nickel for every dance.  Add tips in, and Ruby thinks she’s rolling in dough.  Soon, though, the money begins to run out.  It just never seems to be enough.

After a scary run-in with a customer who loaned her some money, Ruby thinks she’s got a handle on things.  Her mother thinks she’s a telephone operator, and her sister doesn’t seem to know what’s going on.  Ruby’s also got a serious boyfriend, local ne’er-do-well, Paulie Suelze.  He’s helped her out of a few jams, and he always seems to know when she needs a little help.  If only he wouldn’t keep pressuring her to do things she’s really not ready for.

Ruby soon realizes that her world is slowly unraveling.  Her new life has lost some of its luster, she’s lying to nearly everyone, Paulie is not the guy she thought he was, and the world is at war.  Can she straighten things out before her life is destroyed completely?  How is it even possible that she’s sunk so far so fast?  Read Ten Cents a Dance to learn what one girl will do to escape a life she’s not sure she ever wanted.

As someone who is fascinated with the WWII era, I really enjoyed Ten Cents a Dance.  I knew a little about taxi dancing, but this book shed new light on it.  I knew this “occupation” began in the speak-easies of the 1920’s and continued through WWII.  I didn’t know, however, that there are still taxi dancers in some major cities today.  Through this novel, it is easy to see how quickly girls could be drawn in by the money and attention and how easily things could also go horribly wrong.  Readers will root for Ruby to clean her life up and become the person she should be.

I love a good fairy tale.  Snow White and the Seven Dwarfs is still one of my favorite Disney movies of all time.  And what girl didn’t dream of being Belle in Beauty and the Beast (especially since the Beast gave her that wicked awesome library)?  My point is…fairy tales are great.  They’re even better when they’re adapted for a new audience.  My latest read is just such a tale.  Jessica Day George’s Princess of the Midnight Ball is a retelling of the fairy tale The Twelve Dancing Princesses, and it has been retold to fit a young adult audience.  Now, many of my students will claim that they’re too old for fairy tales, but I contend that you’re never too old for a great story of romance and good triumphing over evil.  They’ll get it all in Princess of the Midnight Ball.

Princess Rose and her eleven sisters mysteriously disappear every night.  No one knows where they go, and the sisters cannot speak of their activities.  The only evidence that evil is afoot is their worn-out dancing slippers.  The sisters are under the power of the King Under Stone, a horrid being who is imprisoned deep within the earth.  The princesses are condemned to dance for him every night at his Midnight Ball.  There is seemingly no escape from this horrible curse.

Galen, a soldier returning from war, has recently been hired as a gardener at the palace.  He notices that things are not right with the princesses.  When the king begins to offer rewards for he who can solve the mystery of his daughters’ nightly activities, and the princes who try to figure things out begin to die, Galen starts to piece things together (with the help of a few magicians-in-disguise).  He is determined to help the princesses, especially Rose, break their curse.  He seeks no reward other than the knowledge that the princesses are safe.  (But we all know how those things go…the brave but poor commoner is really the best guy for the nice princess to end up with.)  Will he succeed?  Will the curse be broken?  What will become of the princesses, Galen, and the King Under Stone?  I’ll leave that for you to figure out.

Princess of the Midnight Ball is a lovely story, and the book cover is one of the most beautiful I’ve seen.  Although this will be marketed as a “girl book,” there’s lots in it that guys will find appealing–danger, fighting, and bad guys.  It’s a winner for all readers!