I picked up The Great Greene Heist by Varian Johnson in March at my school’s spring book fair. I finally decided to read it this week. (I was in the mood for something a little lighter than the other books I was reading.) I finished it earlier today, and I now want to settle in for an Ocean’s 11 movie night. That’s a good thing.

If you’re looking for a contemporary middle grade novel featuring a diverse cast of characters, The Great Green Heist is what you’re looking for. If you want to read a book about kids scheming, using their wits, and getting one over on bullies–both kids and adults–this is the book for you. And, if you’re in the mood to read a light-hearted novel that has some marked similarities to the Presidential election, you’ve once again got a winner in The Great Greene Heist. (Note: This book was published in 2014. I doubt the author meant the book to so closely resemble the 2016 election, but it does nonetheless.) 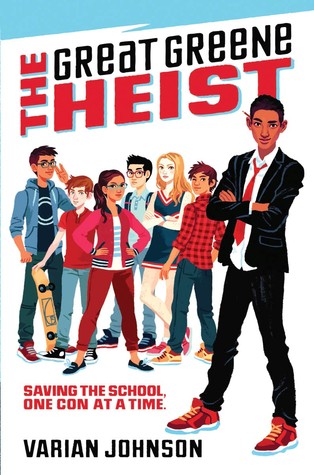 Jackson Greene was one of the greatest con artists Maplewood Middle School had ever seen. Due to fallout from his last con, however, Jackson has put his conning days behind him…or has he?

When word gets out that Keith Sinclair, a nemesis of Jackson’s, is running for Student Council President, Jackson knows he has to step in. You see, Keith is running against Gaby de la Cruz, Jackson’s former best friend. Jackson knows Gaby will be a great president and run an honest campaign. Keith, on the other hand, is sure to use every dirty trick in the book–including blackmailing the principal–to make sure he wins.

As Jackson gets more proof that Keith is up to no good, he assembles a crew to pull off the greatest election showdown in middle school history. Their mission is to make sure Gaby wins the election and expose Keith Sinclair for the rat he is. If Jackson happens to get back in Gaby’s good graces in the process…well, that’s a bonus.

Will Jackson and crew be able to pull of such a complicated con? Will everyone stick to the plan? Who will win the school election, Gaby or Keith? Find out when you read The Great Greene Heist by Varian Johnson.

I cannot say enough good things about this book. It was entertaining from start to finish, and there was a fair amount of geeky humor that I absolutely adored. (I’ve always wanted to learn Klingon, and this book may have given me a push toward making that happen.) All of the characters are smart in their own ways, and, in my opinion, use their intelligence for the greater good. Definitely Starfleet Academy worthy.

The book also invites discussion on the election process–be it school, local, or national–and what characteristics qualify someone to be a public servant. I definitely saw similarities between Gaby, Keith, and our two current Presidential nominees. I have a feeling other readers will as well. (Is there a real-life version of Jackson Greene behind the scenes of our national election? I guess that remains to be seen.)

I would highly recommend The Great Greene Heist to readers in 4th or 5th grade on up. Some of the humor–particularly the nerdier stuff–may not resonate with younger readers, but they’ll still find much to enjoy in the antics of Jackson and his crew.

For those who think this book is their cup of tea, there’s more to love. The second book in the series, To Catch a Cheat, is already out. Perhaps I’ll buy this one at my next book fair (which is coming up in November).

Warning! If you haven’t read Steve Cotler’s Cheesie Mack Is Not a Genius or Anything and Cheesie Mack Is Cool in a Duel, stop now! Go to your nearest library, check out those books, read them, and then come back. Go ahead…I’ll wait.

All done? Okay then…let’s get to it!

Last year, I had the privilege of hosting an author visit at my school with the wonderful Steve Cotler. (For details about the visit, click here.) During the visit, Mr. Cotler let my students know that they could expect more adventures from his hilarious protagonist, Cheesie Mack. Well, I finally got around to reading the third installment in the Cheesie Mack series this weekend (before my students got their hands on it, and I never saw it again). The book is Cheesie Mack Is Running Like Crazy! I know my students will be just as enamored of this book as they were the first two books in the series. (I seriously can’t keep them on the shelves.) They’ll love Cheesie’s humor, love of lists, fierce battle with his sister Goon (June), friendship with Georgie, and his first days in middle school!

Ronald “Cheesie” Mack is about to enter a new world…middle school. Luckily, he’s got his best friend Georgie by his side, but how can Cheesie and company make an impression on students and teachers who are totally new to them? Cheesie thinks he may have the answer. Run for 6th grade class president!

But there may be a problem. Cheesie’s friend from elementary school, Lana, also wants to run for president. (You may recall that Lana is most definitely NOT Cheesie’s girlfriend!) Cheesie doesn’t want to hurt Lana’s feelings, but he does want to be known as something other than “June’s little brother.” What’s a kid to do? Well, Cheesie comes up with something that will satisfy almost everyone…

During all of the class election craziness, Cheesie also has to deal with his horrible sister, joining the school’s cross-country team, and generally learning to survive middle school. He encounters everything with the humor, wit, and intelligence that have gotten him out of jam after jam. The question is…will it be enough this time?

Find out how Cheesie, Georgie, and a charming cast of characters make it to the finish line when you read Cheesie Mack Is Running Like Crazy! by Steve Cotler!

While I think Cheesie Mack Is Cool in a Duel is probably my favorite in the series, I think this third installment is pretty awesome. I know my students will devour it, and I anticipate requests to have Mr. Cotler visit my school again.

In case you were wondering, it is absolutely necessary to read the first two books before reading Cheesie Mack Is Running Like Crazy! Mr. Cotler doesn’t take a lot of time rehashing old events. He–or Cheesie–just directs readers to the first two books…or the books’ companion website, http://cheesiemack.com/. (The website is pretty cool and only adds to the awesomeness of the entire series, in my opinion.)

Speaking of the series…the fourth Cheesie Mack book, Cheesie Mack Is Not Exactly Famous, will be out in February of 2014. The fifth book, currently untitled, should be out next summer.

A couple of days ago, I finished yet another book, How to Take the Ex Out of Ex-Boyfriend by Janette Rallison.  (Normally, I post on the books I read immediately after I finish, but, well, life got in the way.)  I think this makes the 290th book I’ve read so far in 2011.

Anyway, as you may have guessed from the title of the book, this is very much a “chick” book.  It’s a light, quick read that will appeal to girls from middle school on up.  It’s not particularly deep, and the main character is a bit aggravating sometimes, but the story is decent and most girls will find something to relate to.

What would you do if you had to choose between your family and the love of your life?  That’s the dilemma facing Giovanna.  Her twin brother, Dante, has unexpectedly decided to run for student council president.  Giovanna expects her too-perfect-to-be-real boyfriend, Jesse, to help with Dante’s campaign, but things don’t really work out that way.  You see, Jesse’s best friend, Wilson, is also running for president, and Jesse has agreed to be his campaign manager.  Giovanna feels betrayed, so what does she do?  She breaks up with Jesse, of course.  (Stupid, stupid girl.)

Now, Giovanna is managing her brother’s campaign and sparring with Jesse on a regular basis.  She just doesn’t understand why he’s so devoted to Wilson.  Can’t he see that Wilson and his buddies are a bunch of stuck-up elitists who look down on everybody else?  They’ve always looked down on Giovanna, and, now that she and Jesse have split, it’s not getting any better, so she is determined that Dante will win this election.  The “little people” need a voice in this school.

As both campaigns heat up, Giovanna realizes that, although she loves her brother and wants to help him win, her feelings for Jesse are still there.  She wants him back, but can she forgive him for what she sees as a betrayal?  Could something more be behind his loyalty to Wilson’s campaign?  Does he want her back, too?  Read How to Take the Ex Out of Ex-Boyfriend by Janette Rallison to discover how one simple class election can both rip a couple apart and, quite possibly, bring them back together.

This book is full of your typical high school drama–objecting to frog dissections, dealing with mean, rich girls, horrible blind dates, fighting with parents and step-parents, young love, and simply trying to survive.  Giovanna has a way of inviting trouble into her life, as do many teenage girls.  (I know I did.)  As I said before, most girls will find something to relate to within the pages of this book.

If you’d like more information on this book and others by Janette Rallison, visit http://www.janetterallison.com/.