Some of you may have noticed that I haven’t posted anything for the past couple of weeks. (If you didn’t notice, well…I don’t know what to do with that.) Anyway, I promise I have very good reasons for my absence. Beginning-of-school-year craziness (technology is a you-know-what when it doesn’t work right), home repairs, and minor illnesses have been to blame. Simply put, even the energy to read left me until just a couple of days ago. With any luck, I’ve turned a corner.

Now, on with the show…

Thursday evening, I manged to finish another of the nominees for the 15-16 South Carolina Children’s Book Award. This book, Duke by Kirby Larson, is also one of my county’s Battle of the Books titles. So, even though it’s a dreaded “dog book,” I knew I had to read it, and, like so many others before it, Duke wasn’t the chore of a read that I anticipated. It was actually kind of sweet, and it shed a bit of light on something I’d never really heard of before, the Dogs for Defense program of World War II. 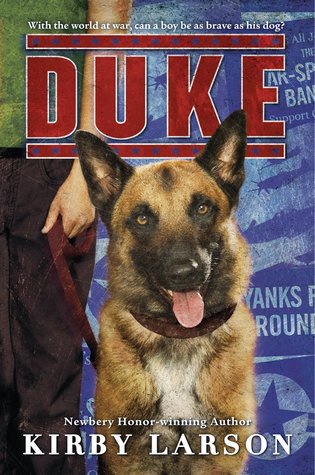 It’s 1944, and Hobie Hanson is doing what he can for the war effort at home. With his dad fighting in Europe, Hobie is the man of the house, and he tries to help his country in ways both small and large. Hobie’s feeling the pressure, though, to do something bigger than anything he’s ever considered–donate his beloved dog, Duke, to the war effort.

The Dogs for Defense program asks Americans to donate their well-trained family pets to the armed forces–as guard and patrol dogs and even bomb sniffers. Hobie knows that Duke is an excellent prospect for this program…but he doesn’t want to let go of his dog. Isn’t it enough that his dad is fighting in this war? Does Hobie have to put his dog in danger as well?

Eventually, Hobie gives in and loans Duke to the Marines…and immediately wants to change his mind. In fact, he does everything he can think of to get Duke home. Hobie even betrays a new friend in his quest to be reunited with Duke. None of his efforts work, and Hobie decides to be brave and deal with his situation as best he can…and that decision could have far-reaching consequences.

Soon, Hobie will realize that there are many different kinds of bravery. His father, who is in more danger than ever, is brave for leaving his home and fighting for his country. Duke is brave when he follows orders and keeps others safe. But maybe Hobie is brave, too. Maybe loaning Duke to the Marines–even though he didn’t want to–was brave. Maybe looking after his mom and little sister is brave. And maybe apologizing to his new friend and standing by his side is brave.

Will Hobie’s bravery be enough to hold things together until he’s reunited with those he loves? Will his father come home soon? Will Duke?

Discover just how much bravery and love mean to a boy, his dog, his family, and those around him when you read Duke by Kirby Larson!

Given that I don’t usually favor dog books or historical fiction, I liked Duke more than expected. It was at once heart-warming and heart-breaking. Truthfully, this was more Hobie’s story than Duke’s, and that probably factored into my feelings on it. It examined what one eleven-year-old boy likely faced while his father was fighting in World War II. Hobie was asked to take on more responsibility than a kid should…and do it without complaining or thinking of what he really wanted. (That’s kind of hard to fathom today.) He didn’t want to loan Duke to the Marines, but he did it anyway. Yes, he regretted his decision and looked for a way out of it, but he eventually realized it was for the greater good. I don’t know many dog owners today who would have done that.

I think Duke would be a great World War II novel study in upper elementary and middle school classrooms. It highlights the rather unknown Dogs for Defense program, and that could lead readers to further research. It could also lead them to examine their own feelings on what they would or wouldn’t give up for an important cause.

Those who read Duke may also want to take a look at another book by Kirby Larson, Dash. This book, which also takes place during World War II, focuses on a Japanese-American girl who is separated from her dog when the girl and her family are sent to an internment camp. Even though Dash is also one of those dreaded “dog books,” I think this book would provide an interesting perspective on what Japanese-American children experienced during World War II. At any rate, it’s moved near the top of my school to-read list.

If you’d like more information on Duke, Dash, and other books by Kirby Larson, check out the author’s website, Facebook page, or Twitter feed. You may also want to take a quick look at the video below. In it, Kirby Larson herself talks a bit about Duke.

I did not want to read this book. If not for the fact that Finding Zasha is a nominee for the SC Children’s Book Award this year, I doubt I would have ever picked it up. (I don’t gravitate toward historical fiction, and I’m getting a little tired of reading “dog books.”) It took me way too long to get through this book, and it was all I could do to even pick it up some days. Eventually, I did force myself to sit down and finish reading (because I’m an adult, sort of), and I have to admit that I found myself enjoying it more than I did at the beginning. It’s still not my favorite of the SCCBA nominees, but at least I won’t have to tell my students that I loathed it. I guess that’s something. 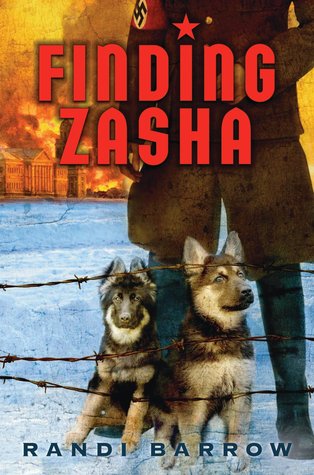 The year is 1941, and twelve-year-old Ivan Savichev lives with his mother in an apartment in Leningrad, Russia. The entire world is at war, and the German forces are bent on destroying Ivan’s home city. Bombs drop from the sky, food and water are scarce, and no one knows if this day will be their last.

Ivan’s mother decides there’s only one course of action. She will join the other factory workers in the Ural Mountains, and Ivan will cross the frozen Lake Ladoga and go to live with his Uncle Boris (a man Ivan has not seen since he was five). Ivan makes this treacherous journey with Auntie Vera, who is going to stay with her sister-in-law in the village of Vilnov. Ivan cannot fathom leaving Auntie, so he stays with her…and it is here that his life will change forever.

Almost immediately upon arriving in Vilnov, Ivan joins a group of partisans, or an underground movement charged with disrupting the work of the German army. He’s surprised to learn that many of those around him are also partisans, and all of them are eager to do their part for the good of Russia.

After the Germans destroyed his beloved home city, Ivan is looking for a way to help his country win this horrible war, and he’s about to get his chance. The Germans have arrived in Vilnov, and Ivan has caught the interest of their leader, the terrifying Major Axel Recht, a cruel Nazi commander. Major Recht is charmed by Ivan’s musical talent, and he needs someone to help care for and train his precious German shepherd puppies, Thor and Zasha. Ivan steps in and seizes an opportunity to feed information to his fellow partisans.

Ivan soon realizes, though, that his mission is not an easy one. Major Recht is suspicious of everyone and quick to anger. He doesn’t fully trust Ivan, and he seems to resent Ivan’s connection with Thor and Zasha, dogs who are being trained to hunt Russians. Ivan knows he must get away from Recht soon, but he cannot fathom leaving Thor and Zasha behind to face Recht’s wrath alone. Ivan plots to escape with the two puppies, an action that is sure to enrage Major Recht. One night, Ivan makes his move, takes the dogs with him, and leaves Recht behind. He can’t know, though, just how far Recht will go to seek revenge…

In the midst of war, Ivan eventually finds a measure of peace as he finally makes his way to his Uncle Boris’ cabin. He trains Thor and Zasha to be faithful companions, he learns about farming, he visits with friends…and he grows perhaps too comfortable. When his worst enemy returns, Ivan must flee once again, but this latest escape puts Zasha in danger. The dog has gone missing, and Ivan must make some difficult decisions that could impact the safety of his friends and his own future.

What will Ivan do? Will the evil Major Axel Recht catch up with him? What will become of Thor and Zasha? Read Finding Zasha by Randi Barrow to find out!

Even though I wasn’t a huge fan of this book, I do think that Finding Zasha is a good addition to upper elementary, middle, and high school library collections. It presents World War II from a perspective that many students don’t often learn about. Sure, they learn all about American perspectives, and most students know about Anne Frank and the plight of European Jews, but few students–American students, anyway–ever really think about what Russians endured during this war. World War II took the lives of over 25 million Russians, and that’s something that tends to be glossed over in studies of this time period. This book, at the very least, offers a perspective that many American readers rarely consider.

There is another book for those who enjoy Finding Zasha. Saving Zasha, which was actually written first, is the story of what happens to Zasha after the events in Finding Zasha. I’m not sure if I’ll get around to reading this one, but I’m sure many of my students will. (Usually, if there’s a dog on the cover, I don’t have to do much “selling.”)