Every once in a while, I thank the Maker that I did not grow up in the age of social media. Adolescence was hard enough without worrying about my most embarrassing moments–and there were a lot of them–ending up on Facebook, Twitter, or YouTube. As the fat nerd who played the tuba, I was already a target for bullies. I shudder to think what I would have had to deal with had social media been a factor in my life…the way it was for the protagonist of my latest read, The Possibility of Now by Kim Culbertson. 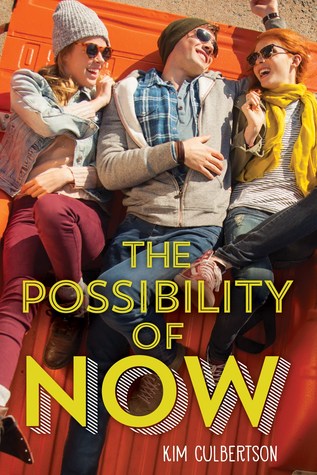 In this book, our main character, Mara, feels the need to disappear after she has a major meltdown and someone posts her shame on YouTube. Over half a million hits later, Mara escapes her elite private school in San Diego and journeys to Lake Tahoe to spend several weeks with the father she’s never really known.

Mara is hoping that this drastic change in scenery will help to clear her head…and perhaps allow everyone to forget about her public breakdown in the middle of her calculus exam. If only she could forget.

Mara makes a detailed plan to get her life back on track, but, as so often happens, plans have a way of changing. She still does a ton of work to stay on top of things at school, but she gradually begins to let go a bit and actually enjoy life in Tahoe. She makes friends who encourage her to live a little and take things less seriously. She sort of begins to know her father. More importantly, Mara begins to realize just who she is and what’s really important to her. Maybe it’s not being perfect or worrying about everyone thinks of her. Maybe is exploring the possibilities around her and learning to truly live in the now.

While Mara misses parts of her life in San Diego, she’s coming to love the slower pace and relaxed atmosphere of Lake Tahoe (not to mention the guy who’s captured her interest). As the time nears for her return to San Diego, she wonders if she really wants to go back at all. Maybe she can make a home here with her father and new friends. Maybe she doesn’t have to go back home and face what made her leave in the first place.

Can Mara reconcile the person she’s become in Tahoe with who she was in San Diego? Will she be able to face her past while embracing her future? Explore the possibilities when you read The Possibility of Now by Kim Culbertson.

In addition to dealing with how social media now plays into adolescence, I think this book also addresses the pressures that young adults face, particularly as it concerns academic performance. I related strongly to this aspect of Mara’s character.

Like Mara, I was an overachiever, and I freaked out if I made less than an A on an assignment. This was true all through middle and high school, even into college. I even had a bit of a meltdown when I realized I was doing too much. For me, this didn’t happen until college, and it led me to change my major and eventually find the path that steered me to librarianship. So, I get what Mara went through, and I think a lot of young adults will feel the same.

If you’re interested in sharing The Possibility of Now with others, I would recommend it for middle grades and up. Mara is a high school student, so those readers will probably relate more to what she’s dealing with, but it’s accessible to anyone who’s ever wanted to escape an embarrassing situation and try to reinvent themselves somewhere else. Can we all do that in picturesque Lake Tahoe while learning to ski? No, but we can dream.