It’s no secret that “dog books” circulate heavily in my school library. Most of the time, all I need to do is display a book with a dog on the cover, and it doesn’t stay on the shelf very long. Well, thanks to Sarah Lean, I now have one more “dog book” to share with my students. That book is Hero, and it was released to the masses this past Tuesday.

I was lucky enough to receive an advance copy of Hero through Goodreads First Reads, but I didn’t make time to finish it until last night…and I did read the bulk of the book in a single evening. It was a quick, engaging read suitable for anyone–young or old–who has ever imagined themselves to be extraordinary, struggled with fitting in or standing up for what’s right, or had a special bond with a beloved animal. (I’m pretty sure that covers everybody.)

Hero highlights heroic actions–from both humans and canines–in everyday situations…and in circumstances that defy even the most vivid imaginations. 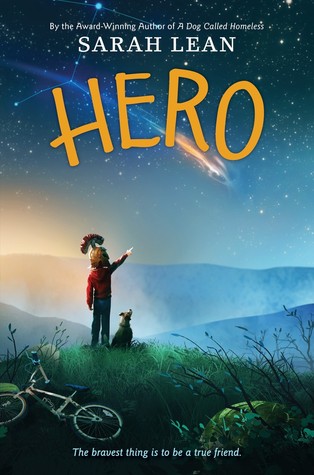 Leo Biggs often imagines himself as a gladiator, fighting in the Roman amphitheater and trying to win the favor of Jupiter. In real life, though, Leo is a bit of an outcast. He only has one real friend–at least, just one human friend–but Leo longs to be seen as brave, popular, and extraordinary. And one day, he thinks he has his chance…

After a rather interesting episode at school, Leo gains the notice of Warren Miller, probably the coolest guy at school. Warren invites Leo to hang out after school…but Leo has to prove himself worthy of being in Warren’s crowd. Even though Leo is hesitant about what is asked of him, he’s willing to do just about anything to be popular. Leo couldn’t know, though, that his actions would lead to more trouble than even his powerful imagination could conjure.

One day, Warren and his crew try to convince Leo to have a little “fun” with Jack Pepper, his neighbor’s dog. Leo knows what’s going on is wrong, and he doesn’t really want to participate. What happens next changes everything Leo feels about himself and what the people in town think of him. Leo takes credit for saving Jack Pepper’s life (even though it was really the other way around), and now everyone thinks he’s some kind of hero. Only Leo, Warren and friends, and little Jack Pepper know the truth…but none of them are talking.

Leo is enjoying his new status as a town hero, but part of him knows that he’s living a lie. One day, however, something happens that puts Leo’s vision of himself as a hero to the test. A catastrophic event hits the town, and Jack Pepper is put in real danger. Leo knows it’s up to him to save this little dog, but what can one boy do in a truly perilous situation?

Will Leo finally step up and be the hero that Jack Pepper needs? Will Leo–or anyone else–ever reveal what actually happened when he “saved” Jack Pepper to begin with? And will Leo ever discover what it really means to be a hero? Answer these questions and many more when you read Hero by Sarah Lean.

Hero is a good book for illustrating the importance of being true to oneself and standing up for what’s right…even when it’s not easy. This book also emphasizes the value of all types of friendships–those with kids, adults, and even animals. As the story progresses, Leo begins to realize that real friends are loyal, even when he doesn’t deserve it, and he needs to do whatever is necessary to prove his loyalty as well. Sometimes, that simply means being upfront and honest about his mistakes and doing whatever he can to make things right.

I think Hero is a good fit for most elementary and middle grade readers. It deals with issues like bullying, honesty, popularity, imagination, bravery, friendship, and, of course, caring for animals. I’m sure this book will be a big hit in my own school library.